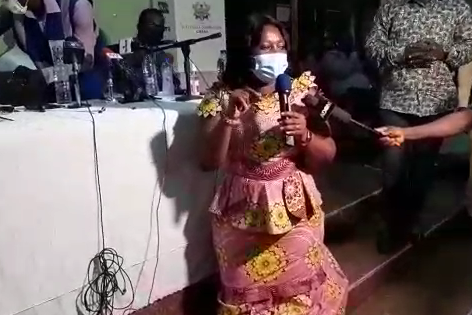 “I appealed to you the last time we met to vote for the MCE nominee, but you declined. Today, we have another opportunity to confirm the President’s MCE nominee for Cape Coast. If it doesn’t go well, we will all be affected, especially me.”

“So I will plead with you to give him the nod, bearing in mind the development of the metropolis. If I need to kneel down before you, I will so that honourable members will consider and confirm the President’s MCE nominee. If anyone has issues with the MCE nominee, please do forgive him and vote for him,” she said.

Just after 40 minutes into the programme, organizers called for a break of about thirty minutes, and that lasted for over an hour.

There were several meetings to convince the assembly members to give the former MCE the nod.

The Minister and the MCE nominee together with the MP for Cape Coast South, George Kweku Ricketts Hagan and other government officials held a crunch meeting to see how best to convince the assembly members.

Ernest Arthur was however rejected for the second time, despite the Central Regional Minister’s appeal for votes to get him confirmed.

The re-nominated MCE failed to meet the two-thirds majority in the second vote held on Wednesday.

Mr. Arthur polled 40 ‘YES’ votes out of 65 Assembly members who took part in the confirmation process.