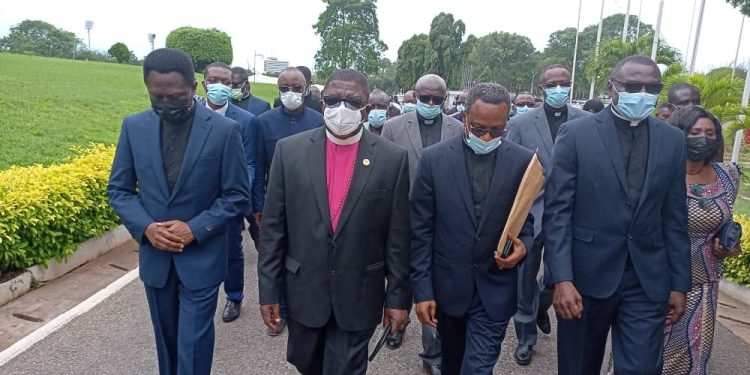 Some Christian leaders have submitted a memorandum to Parliament on the Proper Sexual Rights and Ghanaian Family Values Bill that is still under consideration by the legislative body.

The Church of Pentecost, whose Chairman, Apostle Eric Nyamekye as well as Apostle Dr. Aaron Ami-Narh, President of the Apostolic Church, Ghana, were part of the delegation that gathered 15,000 signatures to express strong support for the bill.

The memorandum was presented to Parliament’s Committee for Constitutional, Legal and Parliamentary Affairs on Wednesday, October 6, 2021.

About 20 members of Parliament have initiated processes to have a law passed to criminalise LGBTQ+ activities and advocacy and also jail LGBTQ+ people, their sympathizers, and funders.

The bill, dubbed “The Promotion of Proper Human Sexual Rights and Ghanaian Family Values Bill 2021,” has received wide public support, with a section of the public condemning it and describing it as promoting hate.

The Christian Council and the Office of the National Chief Imam have already declared their support for the bill.

While endorsing the controversial bill, the Chairman of the Church of Pentecost, Apostle Eric Nyamekye, said their support for the bill is borne out of the belief that LGBTQI+ “is something against our Christ and against our God.”

“They [LGBTQ+ advocates] are saying that God is not intelligent, [and that] he should have given other options. God is a sovereign God, and we want to stand completely for what we believe.”

One of the proponents of the bill and MP for Ningo-Prampram, Sam George, expressed optimism that the bill will be passed when it is presented before Parliament.

He described the support of the clergymen as a key milestone to the passage of the bill.

“This is a landmark or a key milestone… Our bases are covered, from the academic perspective, professionals, religious authorities, traditional authorities. I am convinced that it will pass overwhelmingly,” he said.