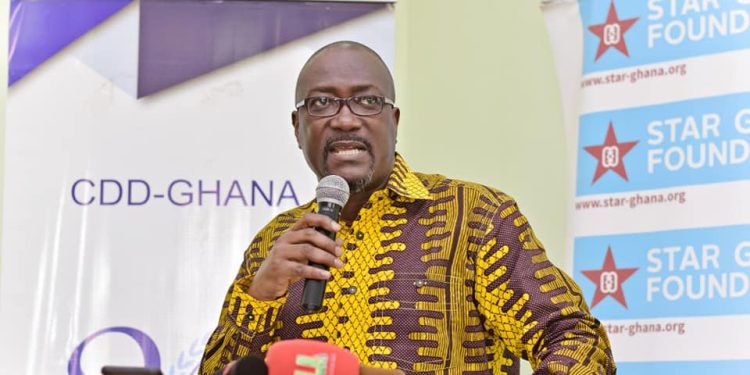 The Executive Director of the Centre for Democratic Development, CDD-Ghana, and one of the 15 renowned legal, academic, and civil society professionals who have filled a memorandum challenging the anti-LGBTQI bill has questioned the support of Christian bodies for the bill.

The renowned professor is of the view that the stance of the churches lacks theological reasoning.

Some members of Parliament have initiated processes to have a law passed to criminalise LGBTQ+ activities and advocacy.

The bill, dubbed “The Promotion of Proper Human Sexual Rights and Ghanaian Family Values Bill 2021,” has received wide public support, with a section of the public condemning it and describing it as promoting hate.

Some Christian leaders have submitted a memorandum to Parliament on the Proper Sexual Rights and Ghanaian Family Values Bill.

The Church of Pentecost and its Chairman, Apostle Eric Nyamekye, as well as Apostle Dr. Aaron Ami-Narh, President of the Apostolic Church, Ghana, were part of the delegation that gathered 15,000 signatures to express strong support for the bill.

The memorandum was presented to Parliament’s Committee for Constitutional, Legal, and Parliamentary Affairs on Wednesday, October 6, 2021.

The Church of Pentecost has also vowed to campaign vigorously against parliamentarians should they not see to it that the Bill is passed into law with immediate effect.

The Church believes the Members of Parliament (MPs) owe Ghanaians the moral duty to pass laws in the interest of the majority, hence, the Proper Sexual Rights and Ghanaian Family Values Bill brought before the house must be treated with the urgency it deserves.

The Catholic Bishops of Ghana have also endorsed the draft bill. The religious leaders say LGBTQ+ is “morally unacceptable”.

“I seriously struggle to see the theology of compassion, the theology of redemption, and the theology of grace that actually Jesus Christ for the Christian preached and taught in the position of the Ghanaian church on this matter. They single out the biblical disapproval of the behavior of the Sodom and Gomorrah as the prime example of this but, let us not forget that in the Leviticus and Deuteronomy adultery was forthrightly condemned and just in very plain language but also the punishments that were prescribed in those texts was the stoning to death for both the adulterer and the adulterous and yet in the New Testament, Jesus Christ exemplifies the theology of compassion, grace, and redemption by demonstrating what you do with such people and told the people that he who is without sin should cast the first stone.”

“That is the theology I expected the church to come to this question with but when the church makes a common course with political interest and to marshal the force of the state to condemn these people as criminals and to put in jail and subject them to all manner of inhumane treatments persons who otherwise have not caused anyone any harm, I fail to see the theology of Christ in that kind of conduct.”