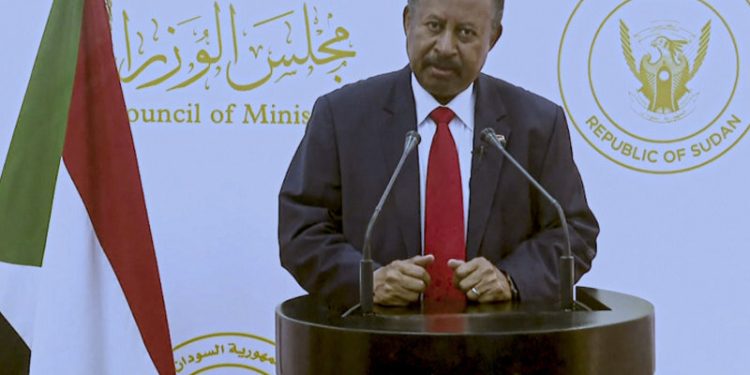 Ayman Khalid, governor of the state containing the capital, Khartoum, was also arrested, according to his office’s official Facebook page.

Dubai-based broadcaster Al Arabiya reported the airport in Khartoum had been shut and international flights cancelled.

“Metrics corroborate user reports network disruptions appearing consistent with an internet shutdown,” the advocacy group said. “The disruption is likely to limit the free flow of information online and news coverage of incidents on the ground.”

The arrests come after US Special Envoy for the Horn of Africa Jeffrey Feltman met with military and civilian leaders in Khartoum on the weekend to find a compromise to the dispute.

The souring ties between the military and civilians in the ruling government threaten Sudan’s fragile transition to democracy since the military’s ouster of Bashir and his Islamist government in April 2019 after nearly three decades of autocratic rule.

Pro-military protesters briefly blocked major roads and bridges in Khartoum on Sunday, amid growing tensions between the generals and the pro-democracy movement that fuelled the uprising that lead to the toppling of former president Omar al-Bashir.

The current crisis surfaced with a coup attempt last month. Officials blamed Bashir loyalists for the move. But the generals lashed out at the civilian elements of the government, accusing politicians of seeking government posts rather than helping ease people’s economic suffering.

General Abdel-Fattah Burhan, the head of the ruling Sovereign Council, said last week that dissolving the Hamdok government could resolve the ongoing political crisis. That suggestion was rejected by hundreds of thousands of pro-democracy protesters who took to the streets of Khartoum and elsewhere in the country on Thursday.

Several cabinet ministers took part in big protests in several parts of the Khartoum and other cities last week against the prospect of military rule.

Burhan has previously asserted his commitment to the transition.

Uganda: One killed in bomb attack at Kampala bar