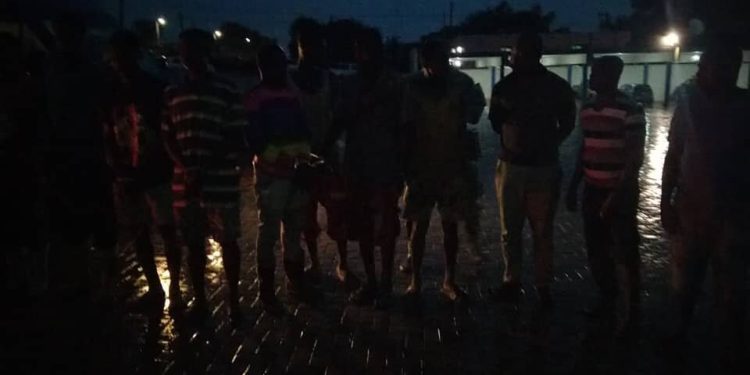 Thirteen illegal miners have been arrested for mining along the river Birim in the Eastern Region on Wednesday, October 6, 2021.

The illegal miners, who were carrying out their activities right in the middle of the Birim River, were arrested by the Ghana Small Scale Miners Taskforce together with persons believed to be their financiers, at Kwaman Ekoso, Accra Village, and Anyinam.

The National Commander of the Ghana Small Scale Miners Association Task Force, Patrick Don Chebe, who spoke to Citi News after handing the suspects over to the regional police command, said the task force will stop at nothing to get rid of all illegal miners operating along water bodies and in forest reserves.

“We are sending a strong warning to all illegal miners encroaching the red zones and the forest reserves that we as a small-scale mining task force is coming after them and we will not stop until we have cleared all of them from there.”

Recently, over 15 illegal miners including foreigners were arrested in the same region.

The illegal miners, who are largely foreigners from Burkina Faso, Benin, and Ivory Coast, have infiltrated the communities, diverted the course of the Pra river, and are mining with mercury.

The Deputy Minister of Lands and Natural Resources, George Mireku Duker, who led the operation in a Citi News interview said, the group was stopped “because they don’t have a license to mine. It is in an illegal site. They must produce an EPA license before they start mining”.

Meanwhile, the Ghana National Association of Small-Scale Miners had earlier called on the government to deal with illegal miners arrested for polluting water bodies.

Speaking to the media after an earlier arrest of some illegal miners at Atewa, the Communications Director of the Ghana National Association of Small-Scale Miners, Abdul Razak Alhassan, said the activities of the illegal miners continue to create a mess in the mining industry.

10 arrested in Sekondi-Takoradi for open defecation; fined GHS200 each