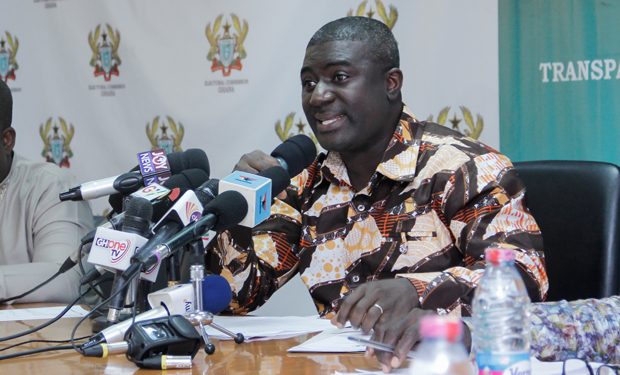 The Electoral Commission (EC) has responded to the myriad of allegations made against it by former President John Dramani Mahama.

Mr. Mahama who led the National  Democratic Congress (NDC) in the last poll had among other things accused the Commission of ballot stuffing, fraud, militarization of the process, among others.

Deputy Chairman of the Electoral Commission in charge of Corporate Affairs, Dr. Eric Bossman Asare, at the commission’s ‘Let the Citizen Know’ encounter on Monday, October 25, 2021, dissociated the EC from the violence that erupted in the electoral process.

The Commission also asked the Ghana Police Service to investigate claims of criminality Mr. Mahama levelled against the EC.

“The transparency of our processes makes ballot-stuffing impossible. It cannot be done. We call on the former President in the interest of our democracy to provide evidence of the stuffing of the ballot boxes by the EC officials. The police should investigate this as a matter of urgency because its potential can erode our democracy.”

Mahama said the Electoral Commission under the leadership of Jean Mensa superintended over the country’s worst elections in 2020 and so will have to work hard to repair the poor image it has created for itself.

John Mahama claimed that the deployment of military personnel to collation centres forced some electoral officers to declare results in favour of the governing New Patriotic Party.

The former President said the 2020 election was not transparent, as touted by the Electoral Commission and government.

Speaking on Global FM in Ho during his “Thank You” tour to the Volta Region, the former president said, although the 2020 elections were manipulated in the NPP’s favour, there is hope for the NDC to win the 2024 elections.

“But for a lot of scheming that took place, the NDC would have won the election. I do believe that we did win, but a lot of things went untoward and so even though power did not come into our hands, it does not mean we do not have the prospects of winning.”

Although there were 61 recorded cases of electoral and post-electoral violence across the country, the Chairperson of the Electoral Commission, Jean Mensa, described the 2020 general election as historic, transparent, efficient, and cost-effective.

She has however urged the security agencies to make public the findings from the investigations conducted into the circumstances that led to the killing of seven persons during the 2020 general elections.

She pointed out the recommendations will make elections in subsequent years better.

“Sadly, seven lives were lost, and though these did not occur at our polling stations or arise as a result of misconduct on our part, one life lost is one too many. We are hoping that our security agencies will share their findings and recommendations for future learning”.