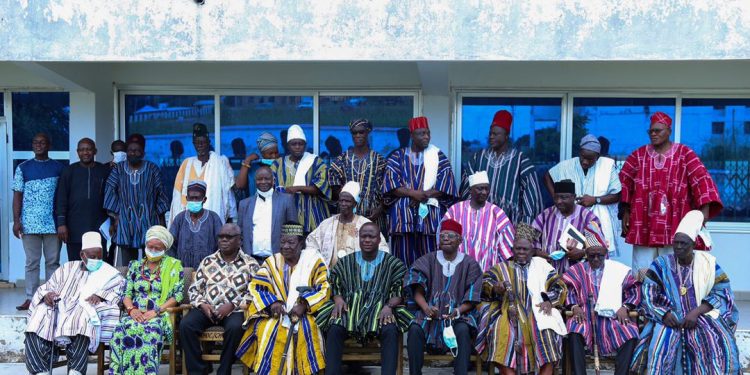 The Minister for Lands and Natural Resources, Samuel A. Jinapor, has announced that government will this year launch the Community Mining Scheme, an Alternative Livelihood Programme for illegal miners in the Upper West Region to help the youth in the region engage in responsible and effective mining.

He said this programme will aid the youth of the Upper West Region earn some decent income and also go a long way to prevent the engagement in illegalities.

He disclosed this during a meeting with the Upper West Regional House of Chiefs in Wa, on Thursday, 7th October 2021.

The Minister reiterated the fact that minerals have been discovered in the 5 Regions of the North, particularly in the Upper West Region which is fast breeding illegal mining activities and therefore called for the support of the chiefs to bring an end to the menace as soon as possible.

He assured the chiefs that the issues on land tenure system will be thoroughly examined by a committee and find ways of dealing with it.

The Minister emphasized the pivotal role of Chiefs in the total Administration of the natural resources of the country.

He said “Chiefs have and will always be an automatic partner in the land administration of our country”.

Mr. Jinapor thanked the chiefs for their time and assured them that he will do everything in his power to bring development into the region.

On his part, the President of the Upper West Regional House of Chiefs, Naa Dikomwine Domalae, called on the government to sensitise the Chief on the New Land Act, Act (1036) as stakeholders of the Land Resources of Ghana.

He said they need to be abreast with new developments on issues relating to land Administration and this he said will enable them better appreciate and contribute constructively to the development of land issues of the country.

On behalf of the House of Chiefs, the President pledged their support to the Minister in the combat against environmental destruction which springs from deforestation and illegal mining.

Adding that due to their displeasure of the menace, he said “We traditional Authorities over the years have urged our subjects to desist from bush burning, cutting down of economic trees such as the shea trees, Rosewood and illegal mining as these are contributing factors to climate change especially in Ghana and Africa.”

He, therefore, said that they will together help seek the best ways to help protect the forest cover in order to improve climate change and the ecosystem.

The President commended the Minister for his exploits in the fight against the general destruction of the Natural Resources of our country.

He said, “We have followed with keen interest your exploit, the zeal and response to duty since your appointment as Minister. To my estimation, you have been impactful in your sector especially in the fight against galamsey”.

Nana Addo must not interfere in Dampare’s work – James Agalga

Nana Addo must not interfere in Dampare's work - James Agalga