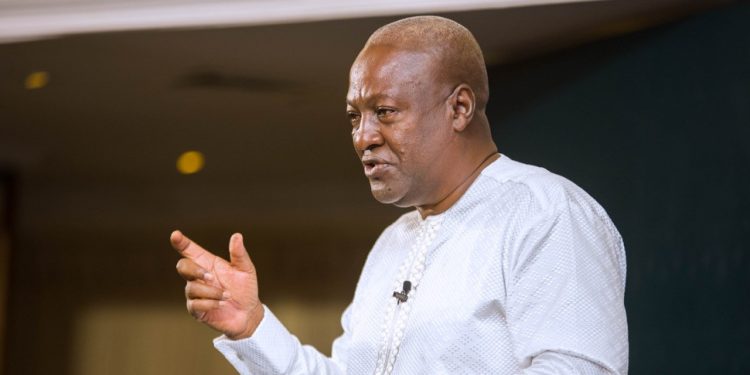 Former President John Dramani Mahama is excited about the World Health Organisation’s (WHO) approval of the first malaria vaccine after years of trial in Ghana and two other African countries.

Mr. Mahama attributed the progress made to his administration’s decision to allow the trial to be done in Ghana.

“It is heartwarming to learn of the World Health Organisation’s (WHO) approval of a malaria vaccine after years of trial. It is refreshing and promising to learn that our expression of interest in 2016 to the WHO and active participation in the Malaria vaccine pilot programme has led to the approval of the vaccine to be deployed in Sub-Saharan Africa and other malaria-endemic regions.”

“I am elated at the prospect of vaccinating millions of African children who will be saved from avoidable deaths as a result of this scientific and Public Health breakthrough,” he posted on Facebook.

He thanked Dr. Vasee Moorthy and his team at the World Health Organisation who responded: “favourably to Ghana’s expression of interest in the malaria vaccine programme in 2016.”

“Congratulations to the WHO, Ghana’s Technical Working Group and the governments and people of Malawi and Kenya who joined us in the successful pilot immunisation programme. As Dr. Tedros Adhanom Ghebreyesus, the Director-General of the WHO, said, this is, ‘a historic moment’,” he added. 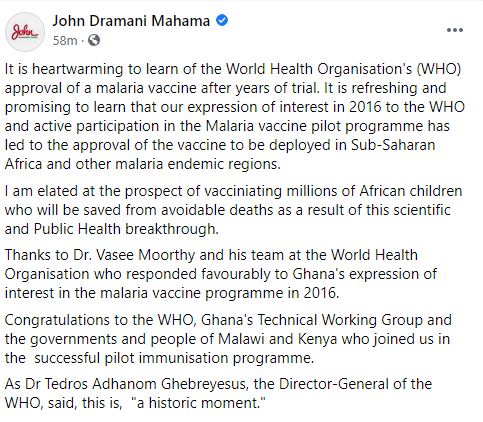 The World Health Organization is recommending widespread use of the RTS,S/AS01 (RTS,S) malaria vaccine among children in sub-Saharan Africa and in other regions with moderate to high P. falciparum malaria transmission.

The recommendation is based on results from an ongoing pilot programme in Ghana, Kenya and Malawi that has reached more than 800,000 children since 2019.

The WHO Director-General, Dr Tedros Adhanom Ghebreyesus, said “this is a historic moment. The long-awaited malaria vaccine for children is a breakthrough for science, child health and malaria control”.

“Using this vaccine on top of existing tools to prevent malaria could save tens of thousands of young lives each year.”

Malaria remains a primary cause of childhood illness and death in sub-Saharan Africa. More than 260,000 African children under the age of five die from malaria annually.

In recent years, WHO and its partners have been reporting a stagnation in progress against the disease.

The impact of exam malpractices on future leaders of Ghana [Article]