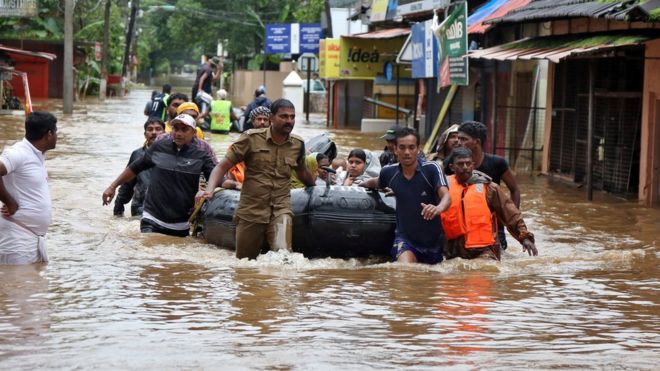 At least 24 people have been killed in floods in southern India after heavy rains caused rivers to overflow, cutting off towns and villages.

Five children are among the dead. There are fears the death toll could rise further as many people are missing.

Several houses were washed away and people became trapped in the district of Kottayam in Kerala state.

Video from the area showed bus passengers being rescued after their vehicle was inundated with floodwater.

Kottayam and Idukki are two of the worst affected districts in the state. Days of heavy rainfall has also caused deadly landslides.

Military helicopters are being used to fly in supplies and personnel to areas where people are trapped, officials said.

Thousands of people have been evacuated and more than 100 relief camps have been set up across the state, Kerala’s chief minister Pinarayi Vijayan said on Sunday.

Indian Air Force medium lift helicopters have been inducted for #floodrelief efforts in districts of #Kerala inundated due to heavy rains.#HarKaamDeshKeNaam pic.twitter.com/ZcwZRKyYZR

Prime Minister Narendra Modi tweeted on Sunday, saying that he had spoken to Mr Vijayan about the situation. “It is sad that many people have died due to the heavy rains and landslides in Kerala. My condolences to the bereaved families,” Mr Modi said.

Officials from Alleppey city told BBC Hindi that the situation in the city was worrying. Alleppey has a network of canals and lagoons and it’s vulnerable to floods.

Meanwhile, several tragic stories are coming out from the affected districts.

A family of six – including a 75-year-old grandmother and three children – were confirmed dead after their home in Kottayam was swept away, news agency PTI reported.