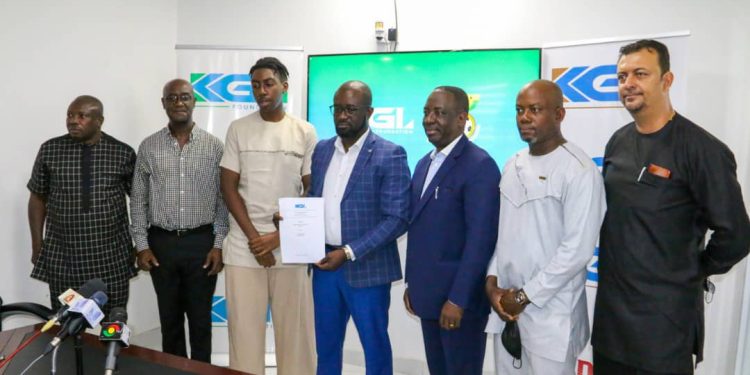 KGL Foundation, a subsidiary of the KGL Group, has come to the aid of juvenile football development, spearheaded by the Ghana Football Association (GFA).

Speaking at the agreement signing event, Executive Chairman of KGL Group, Mr. Alex Dadey, disclosed that the KGL Foundation has been set up as a single-purpose vehicle to drive all corporate social responsibility activities of the KGL Group in accordance with international standards and best practices.

Mr. Alex Dadey reiterated that the ultimate goal of the KGL Group and its subsidiaries is to establish strong strategic corporate relationships, community development and partnerships with organizations and institutions with shared interests in the sustainability of the environment, sports development, tourism, education and health.

He also mentioned that the KGL Group through such partnerships has provided support for sports development with the Ghana Black Stars sponsorship and recently the Kokrokoo Charity Foundation among other social intervention initiatives through the CSR arm of the group, KGL Foundation.

CEO of the KGL Foundation, Mr. Elliot Dadey, added that the Foundation as part of its core tenet of corporate social responsibility and accountability has provided a special annual sponsorship package with a total value of $150,000 over the next 5 years and aimed at supporting the GFA’s efforts to develop grassroots football.

He highlighted under the agreement, KGL Foundation will also provide scholarships to select young players participating in the juvenile football competitions as part of its broader commitment to support education and local sports development.

The President of the Ghana Football Association (GFA), Mr Kurt Edwin Simeon-Okraku, in his speech explained the role and importance of identifying and nurturing local talent for national sports. He intimated this rationale birthed the need to launch the Juvenile Football League with the aim of creating a platform for discovering and grooming young talented footballers across the country.

“Historically, juvenile competitions have been the nurturing grounds to unearth budding football talent for the Under 17, 20, 23 national teams as well as the Senior Black Stars team. Household names including Abedi Pele, Michael Essien, Sulley Muntari, Asamoah Gyan, Stephen Appiah among others are the notable national players discovered through Juvenile Football Competitions,” he said.

In his closing remarks, Mr. Kurt Okraku extended gratitude of the GFA to all stakeholders for this partnership and the collective vision to develop local football. The signing of the agreement between KGL Foundation on behalf of KGL Group and the Ghana Football Association (GFA) took place at the current Headquarters of KGL Group at Labone in Accra on Wednesday, 6th October 2021.

KGL Group with its operational wings, KGL Technology Limited, Keed Ghana Limited and KGL Foundation has been at the forefront of driving digitalization across all the sectors of the Ghanaian economy.