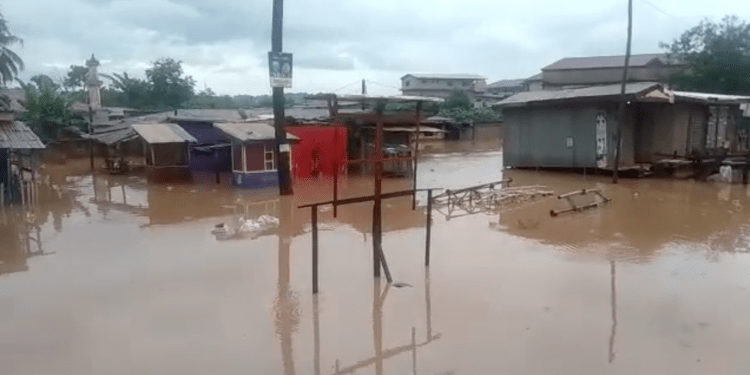 The Greater Accra Regional Directorate of the National Disaster Management Organisation (NADMO) has attributed the perennial flooding of Accra to the lack of political will on the part of Metropolitan, Municipal, and District Assemblies in the region to act in addressing the situation.

According to the NADMO in Accra, most of the assemblies have failed in dealing with the erection of buildings on waterways and sanitation which are major contributing factors to the usual flooding.

In an interview with Citi News, the Greater Accra Regional Director of NADMO, Archibald Cobbinah urged the assemblies to help in tackling the trend.

He assured that the Regional Minister will support them in that regard.

“Those who have been put in charge to ensure that people conform with the building regulations are sitting down without doing their work.”

“That is why I’m talking about the political will because if you are CEO and you know that this thing has to be done, but you are afraid that somebody will say you are antagonizing a political opponent, then you are not ready for the job.”

Recently, a road and building consultant, Ing. Abdullai Mahama, urged MMDAs to strictly deal with the issue of buildings on waterways.

According to him, the move will aid in addressing the problem of perennial flooding in parts of the country.

His call comes on the back of reports of flooding in parts of the Greater Accra Region.

Ing. Mahama in a Citi News interview said the MMDAs must play a vital role in finding a solution to the flooding challenge.

“The assemblies are aware of the physical occupation of these structures. So the assemblies should be able to do the right thing by identifying areas where buildings are supposed to be constructed to know whether those buildings there have the necessary permits and in the case where there are no permits, invoke the clauses in the Land Uses and Stated Planning Act, Act 2016, and effect the demolition of such buildings to allow the free flow of water.”