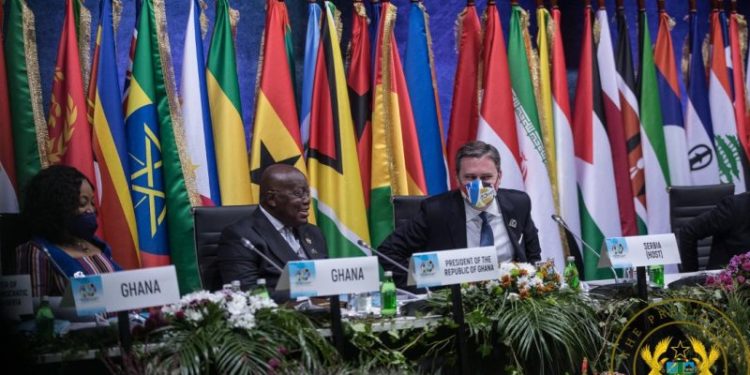 President Nana Addo Dankwa Akufo-Addo has urged countries under the Non-Aligned Movement (NAM) to continue to work towards the global objectives of peace, collective security, development, and inter-dependence.

Speaking at the High-level Commemorative meeting to mark the 60th anniversary of the first conference of Non-Aligned countries, in Belgrade, Serbia, President Akufo-Addo noted that the COVID-19 pandemic and the unsavoury politics of vaccine nationalism had highlighted the need for self-reliance in the global south.

He said it was unfortunate that member states of NAM had become global power play, and are subject to the benevolence of powerful countries, who give out their hoarded supplies at their own pace, not necessarily in tandem with realities.

He said the forum must make far-reaching decisions for a more equitable and balanced world, based on the principle of the equality of sovereign States.

“The need for self-reliance today in the global south is as important as positive neutralism was in the era of the Cold War. The impact of the pandemic on our populations has been severe. We must stand shoulder-to-shoulder, and be resolved to ensure that we are better prepared for future pandemics.

“We must not miss the opportunity of this occasion to take far-reaching decisions for a more equitable and balanced world, based on the principle of the equality of sovereign States. We should continue to work towards the global objectives of peace, development and inter-dependence,” the President said.

President Akufo-Addo restated Ghana’s belief that the Non-Aligned Movement was as relevant in the 21st century as it was in the 20th century, in protecting the interests of the developing world.

“There will be challenges but, working hand-in-hand, we can move ahead together, and, indeed, much further, more so, when, through our co-operation and solidarity, we achieve the restructuring of the global financial system to facilitate the rapid development of our economies.”

“The next 60 years of our Movement must mark its empowerment to meet the wishes and aspirations of our peoples for development, dignity and diversity,” he added.

The Non-Aligned Movement is a forum of 120 developing world states that are not formally aligned with or against any major power bloc. After the United Nations, it is the largest grouping of states worldwide.

The Governments of Serbia and Azerbaijan are co-hosting the 60th-anniversary meeting.

UNODC, CEMLAWS Africa commend Nigeria, others for efforts in fight against maritime crime