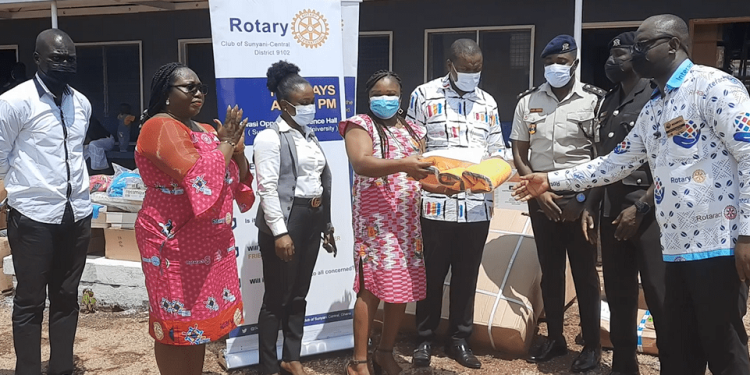 The Rotary Club of Sunyani-Central has donated medical items worth $73,063.20 to 13 medical facilities in both the Bono and Ashanti Regions.

The rest were a suction machine, nebuliser, 5 hospital beds, a dental chair, and 34 packets of examination gloves.

Speaking at the handing over of the items, the President of Rotary Club of Sunyani-Central, Johnson Mawuli Tsagli-Awor noted that the facilities had one problem or the other especially the provision of maternal care because of the absence of certain equipment.

Efforts were made to solicit funding for the items, which came through the Rotary Foundation Global Grant GG 2096430.

Rotarian Tsagli-Awor, also urged the recipient facilities to make good use of the items and take good care of them so that they last to achieve the intended purpose.

The Commanding Officer of the Armour Training School, Lt Col Dominic Buah who spoke on behalf of the 3 Medical Reception Station commended the association for the gesture and promised that they would take good care of the items.

The Midwife in charge of the Nkrankrom CHPS Compound,  Mavis Agyeiwaa noted that the items they have received would go a long way in health delivery at the facility especially the warming of newborns.

Cape Coast: 73-yr-old man injured after he was trailed from the bank and robbed