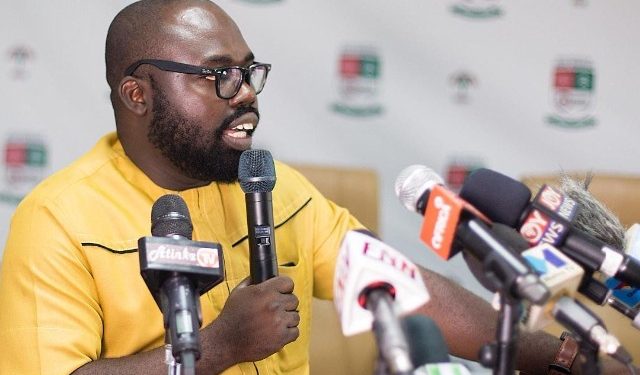 Speaking on Eyewitness News on Monday, Mr. Otokunor said the NDC ensured the arrest of some persons with many thumb-printed ballot papers that had voted for President Akufo-Addo.

The Electoral Commission is challenging claims by former president John Mahama that there was over-voting in the 2020 polls.

Deputy Chairman of the EC in charge of Corporate Affairs, Dr. Eric Bossman Asare while addressing the press in Accra on Monday insisted there was no incident of over-voting that led to over one million votes in favour of President Akufo-Addo.

He said the Commission only recorded one incident in the Savelugu constituency, where one extra ballot was seen for the parliamentary election.

“The transparency of our process makes it totally impossible for this to happen. The ballots cast are cross-checked against the list of number of voters who were verified and issued with ballot papers. Nationwide, we had no issue of over-voting at all the 38,620 polling stations except in Savelugu in the parliamentary election where there was one over-voting,” Dr. Bossman stated.

“The police should investigate this as a matter of urgency due to its potential to derail and undermine our democracy and lead to a lack of confidence in our system and processes,” Dr. Bossman added.

But Mr. Otokunor in responding to the clam said “there were numerous cases of over-voting which our audit revealed.”

According to him, the NDC was looking for the opportunity to confront the Electoral Commission chairperson, Jean Mensa, with its evidence of over-voting during the election petition.

“We were trying to push [it] in court so that the EC chairperson will be brought to the box and produce their documents so that we compared and reveal the over-voting, but that was not allowed. The fact that all our agents at all the polling stations would sign or raise concerns on any of the ballot sheets does not negate the fact that there was over-voting,” he argued.

He said the NDC insists on its position that there was over-voting in the elections.

“These are facts and anyone who is experienced in elections knows this for a fact and Dr. Bossman also knows and that is why they refused for this to be done and to be revealed in court.”

“We believe that ballot papers got into wrong hands. We arrested someone in Ashanti Region. We reported an incident at Ejisu where some ballot papers were arrested fully thumb-printed with EC stamp on it,” he added.