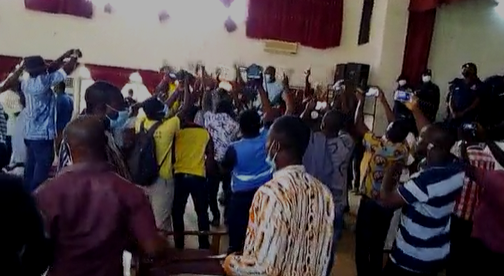 The confirmation exercise was the third after the nominee was rejected two consecutive times. The exercise was fraught with confusion.

This was because a section of the assembly members believed the counting was not done fairly.

It was characterized by blows and misunderstanding between some assembly members, security personnel, and the personnel from the Electoral Commission.

The presence of the security personnel could not deter the assembly members, both those in favour of or against Ernest Arthur, from showing aggression.

Both Members of Parliament for Cape Coast North, Kwamena Mintah Nyarko, and Cape Coast South, George Kweku Ricketts Hagan, were however not spared the brawl.

However, at the end of voting, Ernest Arthur had 45 out of the 63 votes cast.

Shortly after the confirmation exercise, the NDC led by the Members of Parliament for both Cape Coast North and South held a press conference to reject the confirmation of Ernest Arthur, saying, it was not free and fair.

The MCE-elect had failed to meet the two-thirds majority in both elections. In the second voting episode, he polled 40 ‘Yes’ votes out of 65 Assembly members who took part in the confirmation process.

Per the confirmation rules, a nominee is supposed to garner two-thirds of the total votes of the assembly members to sail through.

The Central Regional Minister, Justina Marigold Assan, had appealed to assembly members of the Cape Coast Metropolitan Assembly to vote to confirm the then MCE nominee.

In this election, there were also allegations of financial inducements which the MP for Cape Coast South, Kweku Ricketts Hagan had asked the police to investigate.