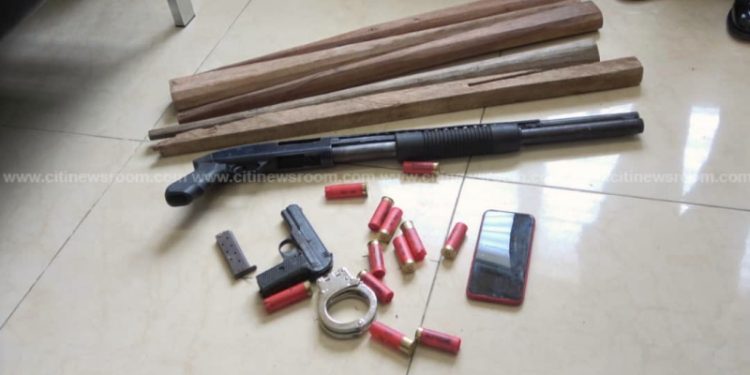 The Central East Police Command has arrested 22 suspects, including the Chief of Yamoah Nkwanta, over a misunderstanding that ensued during the installation of a chief.

Although no casualties were recorded, the two parties involved fired shots indiscriminately, putting the lives of citizens at risk.

Speaking to Citi News, the Central East Police Commander, DCOP Okyere Boapeah, said the arrest was effected after the two parties defied an earlier directive by the police not to install a new chief citing security reasons.

He added that further investigations are underway and the suspects will be arraigned soon.

“There has been some disagreement as to the right candidate to be installed as the new chief of the Yamoah Nkwanta. The misunderstanding made the regional command invite the parties involved for discussions and possible settlement, and the decision to install the chief was put on hold.”

“The kingmakers of Yamoah Nkwanta installed one chief, and this led to violent confrontation and indiscriminate shooting between the two factions. The regional operation was quick to respond, and 22 suspects have been arrested, including the chief.”

The Police commander also indicated that they were able to retrieve one pump action gun, a handgun and eight cartridges from the arrested persons, adding that those found culpable will be processed for court.

Traditional authorities in Yamoah Nkwanta told Citi News the situation has created fear and panic among residents living in the community.

“After the incident, women and children live in fear of the unknown, and it is worrying,” the stool secretary, Solomon Quaye, said.

Earlier this month, a police officer who mistakenly shot into a crowd during the installation of a sub-chief in Suhum was arrested.

Detective Sergeant Welbeck Agyina, a direct cousin of the newly installed sub-chief, allegedly fired a pump-action gun into the crowd during the installation.

Two persons sustained gunshot wounds in the head, while five others were rushed to the Suhum Hospital.