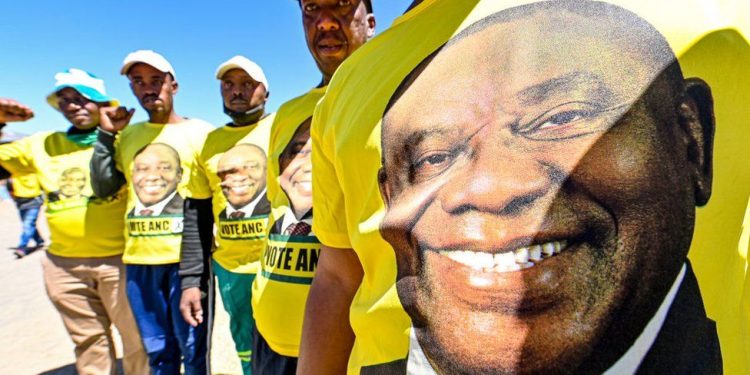 The governing African National Congress (ANC) has dipped below 50% of the vote for the first time in South Africa’s democratic history. Results from Monday’s local elections have left the party of Nelson Mandela politically wounded.

“We are eating this elephant bit by bit,” were the words echoed by Julius Malema, the leader of third biggest party the Economic Freedom Fighters, as a clear picture emerged that the ANC was losing support across the country.

Yet there is no anti-ANC majority coalition, because South Africa’s opposition parties are ideologically very divided.

Acknowledging that coalition governments will be the order of the day, President Cyril Ramaphosa, chosen by the ANC in 2018 to halt the party’s ebbing support, said: “If we are to make this a new and better era, we as leaders must put aside our differences.”

Dogged by a string of corruption allegations in the lead-up to the municipal polls, the ANC is now forced to eat humble pie and be the first to approach other parties about forming coalitions.

Once the Independent Electoral Commission declares the election, there is a window of 14 days for the councils to hold their first meeting. The speaker, who must be elected first, then has to oversee the appointment of a mayor.

Based on the chaos and violence witnessed in 2016, this process is expected to be disruptive and hotly contested.

The formation of coalitions could also be difficult due to varying political ideologies of the negotiating parties.

The governing ANC was already losing support in the 2016 election. It had five years to prove its worthiness but instead most South Africans continued to experience poor delivery of basic services like running water, rolling blackouts and political in-fighting.

The DA, which gets most of its support from white and coloured (mixed-race) voters, has previously ruled out the prospect of ever governing with the EFF. While ActionSA has said working with the ANC would be equal to enabling corruption.

It is understood that informal coalition talks have begun between the ANC and DA, while the EFF has said it will wait to be approached as its support has grown steadily in this election.

In the 2016 municipal polls, the ANC had nearly 54% of the national vote, the DA 27% and the EFF 8%. This year the EFF has grown steadily while the DA has lost some ground in its traditional strongholds.

There is no doubt that behind closed doors, the ANC leadership sees the results as a huge indictment. But in front of the cameras, party leaders tell a different story.

“We’re not losers, we are the winning party,” said ANC deputy Secretary General Jessie Duarte. “Yes our numbers have gone down but that doesn’t make us losers… we don’t disrespect the electorate, they’ve put us in this position and we are not uncomfortable in this position.”

As things stand, the ANC and DA are likely to work together because they have the most seats.

Former President Jacob Zuma’s influence in the outcome of this election could well be overstated, but his supporters had vowed to punish the governing party for jailing him. The ANC suffered a bruising defeat in key cities like Johannesburg, Pretoria and Gqeberha (formerly known as Port Elizabeth). The party also lost its majority in KwaZulu-Natal, which is the largest ANC region and also Mr Zuma’s home province.

ActionSA’s 2% share of the vote nationwide is a significant achievement for a party formed at the height of the coronavirus pandemic that did not contest in all of South Africa’s provinces.