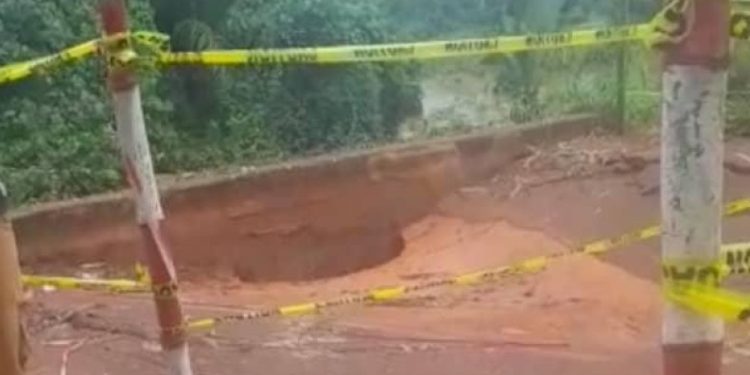 A bridge on the 35-kilometre road from Assin Anyinabrim in the Assin South District to Breman Asikuma in the Asikuma-Odoben-Brakwa District has caved in.

The bridge, constructed four decades ago, had shown visible signs of possible collapse and eventually caved in after hours of torrential rains accompanied by windstorms that hit the area on Friday night.

No casualty has been reported, but the area had been barricaded to caution commuters against any tragedy.

The Assin Anyinabrim community largely comprising farmers, mostly used the bridge regardless of the threat to them.

Some road users in an interview with the Ghana News Agency on Saturday, appealed to the government to repair the road to ensure smooth and safe transportation of goods and people.

“We are going through unbearable difficulties of sending our farm produce to market to make ends meet”, Madam Grace Addo, a 55-year-old farmer, lamented.

“A quick response to our appeal to the Assin South District Assembly and government to fix the road would save the situation,” she said.

A teacher, Mr. Theophilus Amakye Mensah, appealed for an alternative route to be created with dispatch to enable students cross to school.

“Many students who cross the bridge everyday from the Breman Asikuma section cannot do so from now.

The bridge has become a death trap, and many parents won’t allow their children and wards to use it at the peril of their lives,” he stated.

Mr. Frederick Dankwa, the Assemblyman for Assin Anyonabrim Electoral Area, regretted the situation and indicated that the Assembly in collaboration with the Department of Feeder roads were working to remedy the situation.

He acknowledged the glaring imminent collapse of the bridge and attributed it to the recent use of some heavy machinery and equipment by a contractor working on a section of the road.

Similarly, in Assin-Homaho, a farming community in the Assin South District, river Atonsu had overflown its channels and cut off the community from Assin-Fosu, the only access route to the Assin-Fosu Municipality.

Commuters and many farmers were stranded for hours on both sides of the river following the Friday evening downpour.

Though there was no casualty, portions of the road which are under construction were washed away by the floods.