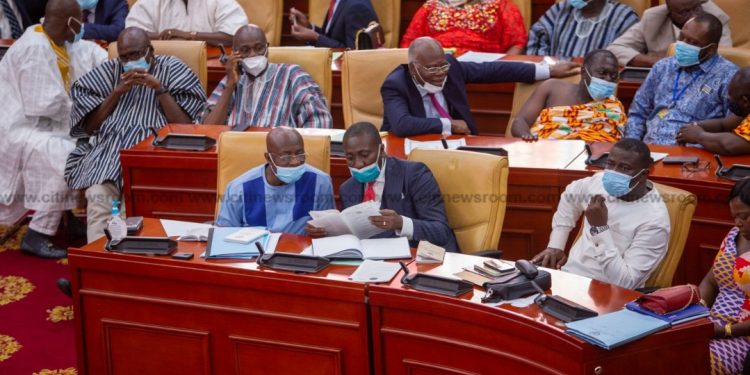 Majority side in Parliament

The Majority Caucus has asked Ghanaians to disregard reports concerning the rejection of the 2022 budget by Parliament.

According to the Majority, the action is illegal and must be treated with the contempt it deserves.

“We assure the good people of Ghana of our resolute willingness to ensure that the 1992 Constitution is respected to the letter by Speaker Bagbin and the Minority.”

Members on the majority side of Parliament staged a walkout during processes to approve the 2022 budget in the House on Friday, November 26, 2021.

This follows a disagreement over a directive by the Speaker of Parliament, Alban Bagbin, for non-MPs to vacate the Chamber following a request for a division after a voice vote in the House.

Deputy Majority Leader, Alexander Afenyo Markin, challenged the Speaker’s interpretation of the voice vote and called for a ‘division’.

Mr. Bagbin thus directed that, per orders of the House, non-MPs had to vacate the Chamber during the division process.

Meanwhile, the 2022 Budget Statement and Economic Policy was rejected after the majority staged a walkout.

The Majority in the statement argued that the action of the Minority and the Speaker of Parliament breaches provisions of the constitution and standing orders of the House.

“The Majority Caucus of the 8th Parliament of Ghana hereby notifies the Ghanaian public to kindly disregard the decision by Speaker Alban Bagbin, that 137 members of Parliament have the power to take a decision for Parliament and have consequently rejected the 2022 Budget Statement and Economic Policy of the Government of Ghana.”

The Majority Caucus argued that: “Article 104 of the 1992 Constitution and Order 109 of the Standing Orders of Parliament are very clear. The two provisions, read together, require that at least 138 MPs needed to have been present in the Chamber at the time of the purported vote. Therefore, the claim that the budget has been rejected by 137 Members of the House is null, void and of no effect because same is unconstitutional”.

“Majority Caucus finds it unfortunate that after making requests to the Finance Minister to reconsider some items in the Budget Statement, the Minority Caucus assisted by Speaker Bagbin, who had earlier indicated his ability to obstruct Government business, refused to give the Finance Minister an opportunity to accommodate their requests and instead hurriedly moved to on their own, attempt to vote against the Budget in a bid to subject the Government of Ghana to embarrassment for mere partisan reasons.”