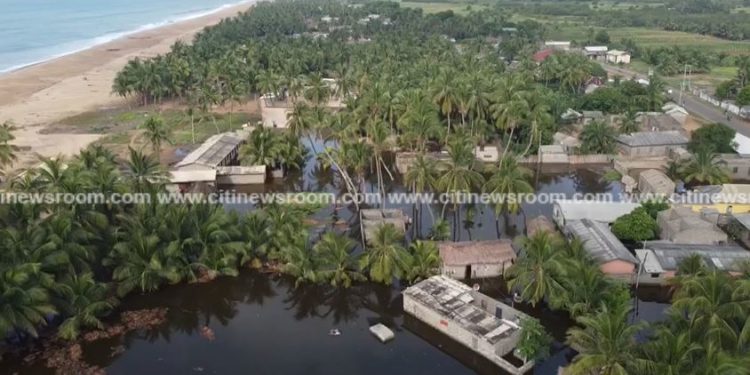 The Member of Parliament (MP) for Anloga, Richard Sefe is appealing to the Volta River Authority to resume the dredging of the Volta River, particularly the portion within Fuvume which connects to the sea.

He contends that the dredging of the Lower Volta end of the Volta River, which has not taken place in years, contributed to the level of destruction caused by recent tidal waves.

Three persons, including a baby, lost their lives in the recent sea action in the area. More than one thousand residents were also rendered homeless.

In an interaction with members of the Parliamentary Select Committee on Works and Housing, Mr. Sefe said the dredging will play a key role in reducing the impact of tidal waves destruction within the area.

“So we are appealing to the Volta River Authority to do the dredging of the sea which they haven’t done in a long while which has been a major problem that has led to the silting of the waterways.”

Hundreds of residents in the Anlo district, Keta, and Ketu South Municipalities were displaced by flooding caused by severe tidal waves.

The Member of Parliament for the Ketu South constituency, Dzifa Abla Gomashie, demanded urgent attention from President Nana Addo Dankwa Akufo-Addo in relation to the completion of the sea defence project in the Volta Region.

But touching on plans to tackle the perennial tidal waves in affected areas, the Volta Regional Minister, Dr. Archibald Letsa admitted the “complex” nature of the phenomenon, explaining that solutions have been developed for the short to long term.

“I must explain that the situation is quite complex. The one in Ketu South, when we complete the second phase of the sea defence project, I am sure it will go a long way in solving the devastation there. But in Keta, we need to look at the situation again and find out what is going on.”

“But for the permanent solution, what is on the table is the completion of the second phase of the Blekesu sea defence project; we are working on that, that is the permanent and long-term solution. For the medium solution, we are thinking about the replacement infrastructure, a lot of assessment has been done, and we are looking at that. In short term, we are supposed to give relief to the people so that they will be comfortable”, the Minister explained.