Over a hundred Sudanese residents in Ghana today besieged the premises of the Sudan Embassy in Accra to protest over the military takeover in Sudan.

Some of the Sudanese youth who thronged the embassy held placards to express their displeasure of the happenings in that country.

The coup, condemned by the international community, has threatened to derail Sudan’s fitful transition to democracy, which began after the 2019 ouster of longtime autocrat Omar al-Bashir. 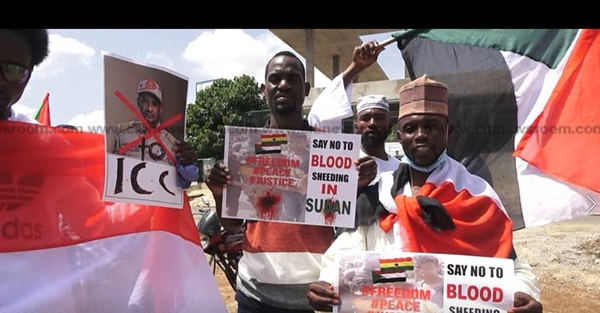 General spokesperson for the Sudan Community in Ghana, Gamaradeen Ayoub spoke to Citi News on their concerns.

“This is a very democratic country ruled by a civilian government. These are some of our demands. Right now, Sudan has blocked its internet service, so we are unable to reach our families to know their conditions. Most of the social media and human rights activists have also been arrested. We want them released immediately.”

The Sudanese military seized power on October 25, dissolving the transitional administration and arresting dozens of government officials and politicians.

The coup has been met with international outcry and massive protests in the streets of the capital, Khartoum, and elsewhere in the country.

Since the coup, the international community has accelerated mediation efforts to find a way out of the crisis, which threatens to further destabilize the already restive Horn of Africa region.

On Thursday, US Secretary of State Antony Blinken spoke separately by phone with the military leader, General Abdel Fattah al-Burhan, and Abdalla Hamdok, the deposed prime minister who was put under house arrest during the coup.

Blinken urged for an immediate return to a civilian-led government and the release of those detained in connection with the coup.

The military detained three leaders of the movement shortly after they met United Nations officials in Khartoum. The meeting was part of UN-led mediation efforts.

Sudan’s protest movement has however announced two days of nationwide strikes, rejecting internationally backed initiatives to return to a power-sharing arrangement with the military.