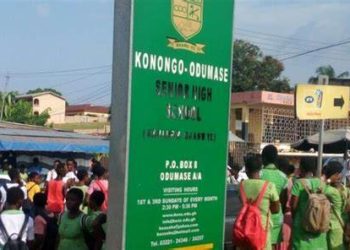 The lawyer for the prime suspect in the Konongo-Odumase Senior High School murder case, Richard Adu Darko, is unhappy the police published details of the juveniles on its Facebook page, although that has since been rectified.

The lawyer in a Citi News interview bemoaned how hostile the school environment has become for the suspect as a result of the ‘carelessness’ of the Police.

”The courtroom took judicial notice of the events of last week. The police on their official handle on Facebook published the names of the juveniles, which is in clear breach of the Juvenile Justice Act. We had already taken steps to communicate with the IGP and the P.R.0 together with the Legal and Prosecution at the Ghana Police Service. As of this morning, when I checked, they had updated the post and taken down the names of the juveniles. The Court gave reasons why they cannot give this children bail. Our argument was on the fact that per the welfare principle in the juvenile justice Act, they should have at least considered the education of these juveniles and given them to the parents, so they report to court from home.”

“But the court indicated that as it stands now, the school is hostile for the students. Going back to school will be a problem. Looking at the nature of the issues, the court is making a point that the case should be transferred to the Attorney General because this may have to be transferred to the High Court. The High Court is mandated to hear such issues when the sentence requires a death penalty.”

According to a police statement, the students went on a bullying spree on the night of Friday, November 5, 2021, after prep hours, leading to the attack on the deceased, Sam’un Larhan, 15.

Larhan Sam’un, the deceased, was stabbed with a knife by his colleague after he attempted to resolve a scuffle between the suspect and his mates.

Preliminary investigations by the police show that the prime suspect,  a 17-year-old was abusing some form-one students and upon resistance by some students, he stabbed Larhan Sam’un to death.

The suspects were initially sent to a Juvenile Detention Center at Juaso in the Asante Akim South Municipality.

The first accused person has been charged provisionally with murder, while the four others were charged with abetment to commit a crime.

The Court declined a request by the lawyer of the prime suspect to grant bail to the suspects and said it considered the safety of the juveniles.

The Court presided over by Her Worship Joyce Bamfo also directed the prosecution to notify the office of the Attorney General to take over the matter.