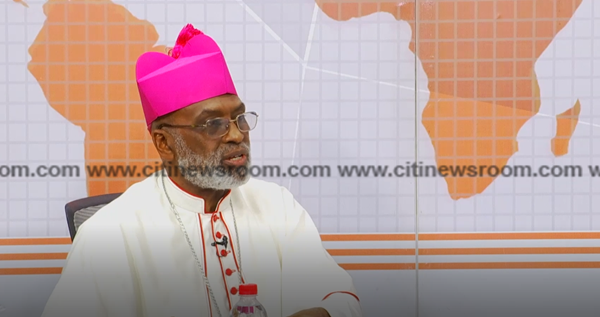 Metropolitan Archbishop of Cape Coast, Most. Rev. Charles Palmer-Buckle has defended why the church in Ghana is in favour of the Proper Human Sexual Rights and Ghanaian Family Values Bill.

He says, the activities of the LGBTQ+ community, should they gain ground in Ghana, will lead the country to self-destruction.

“If we don’t get our people to understand teachings about sexuality and its importance in the framework of the family, the building of the nation and the rest of it, then we are already on the path to self-destruction”, Most. Rev. Palmer-Buckle said on the Point of View on Citi TV.

The controversial issue of the anti-LGBT bill has been topical in recent times with groups that are in support of the bill touting it as one that reflects the views of majority of Ghanaians on the subject matter, while the groups against the bill described it as one that is in breach of human rights and against Ghana’s cultural values.

But in Most Rev. Palmer-Buckle’s view, the choice of LGBTQ+ persons is very incomprehensible and must not be entertained.

“I will have to make it clear that as a church, if you go through our pastoral letters, communiqué since time immemorial, we have dealt with sexual morality, and we don’t believe that an individual’s right must endanger the common good.”

“Unfortunately, with LGBTQ, I am waiting for anybody to convince me how it enhances the great good of the other person”, he stressed.

Parliament’s Constitutional, Legal, and Parliamentary Affairs Committee began public hearings on memoranda received on the bill but suspended it over what it said were technical reasons.

Religious bodies also appeared before the committee to reiterate their commitment to getting the Bill passed.