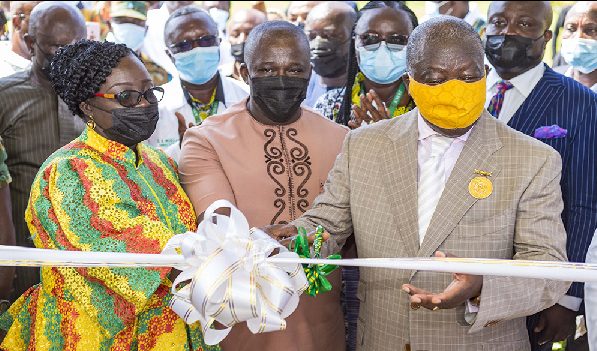 The Asantehene and Chancellor of the Kwame Nkrumah University of Science and Technology (KNUST), His Royal Majesty Otumfuo Osei Tutu II has commissioned a newly-built maternity block at the University Hospital.

He commissioned the facility on Wednesday 27th October 2021.

The commissioning forms part of activities to commemorate the KNUST’s 70th-anniversary celebrations.

The facility designed to help reduce the mother-to-bed deficit as well as congestion at the maternity ward of the hospital was built and donated by businessman and philanthropist, Dr. Frank Awuah Adjei.

In a speech, Dr Awuah Adjei stated that he agreed with his wife to put up the building following their visit to a friend at the hospital.

“We were not pleased with what we saw, so we decided to build this to support the government efforts,” he added.

He hoped that the maternity block would be used effectively to promote quality healthcare in Ghana. He also encouraged affluent Ghanaians to support the government in national development by replicating such a gesture in building a better Ghana.

Dr. Frank Awuah Adjei and his wife assisted the Chancellor in cutting the tape during the commissioning of the facility.