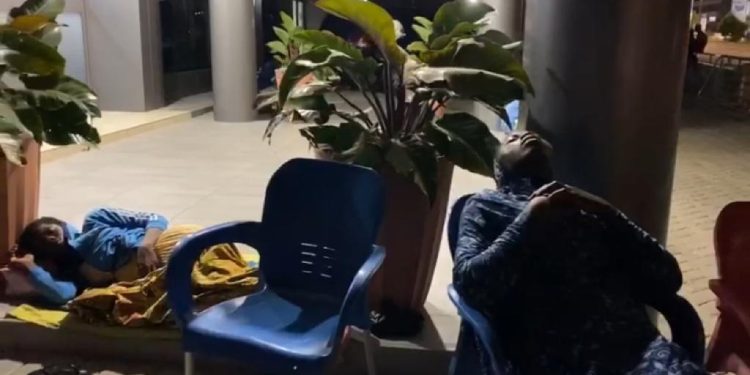 Scores of desperate and frustrated individuals desirous of obtaining the Ghana card literally relocated their sleeping places to the premises of the Ghana Revenue Authority on the Ring Road in Accra.

As at 9:15 pm on Tuesday, November 23, 2021, when Citi News visited the Ghana Card registration centre situated in the offices of the GRA, the news team met the same people who had been there since afternoon.

The applicants, mostly youth and some elderly persons between the ages of 16-75, were there in their numbers waiting to sleep, while others had slept on the floor and on chairs waiting to wake up with the hope of getting the National Identification Card.

According to the applicants, “the total number of 15 registration in a day gives them a slim chance of getting the national ID.

The Ghana Card has become the sole source of identification card required for the re-registration of SIM cards in the country.

This has led to a surge in demand for the card.

Bruce Annin, who spoke to Citi News, said “I came here at 8 pm yesterday [Monday] to sleep here just to register but that never happened. I’m going to sleep here for the second time until I get the card.”

Another applicant also said, “If you don’t stay in the queue till you are attended to and you leave and come the next day, you won’t be part the following day because another queue will be formed and you will miss your place.”

“What they are doing isn’t fair because when you are already in the queue and you leave and return, you will come and meet a new set of people which is very bad and they will tell you weren’t here so you are not part of those who have been numbered,” another applicant also said.

The NIA officials declined to speak on the record but corroborated the claims of the applicants.

Citi News gathered that, only four officials are attending to the over 80,000 people in the Ayawaso Central Municipality.

The National Identification Authority, NIA, began operationalizing 275 districts and 16 regional offices across the country for Ghana Card registration from November 3, 2021.

NIA in a statement said it will be sensitising the public on its operations.

“This will also enable newly-appointed officers to familiarise themselves with their various communities and undertake other preparatory activities,” it said.

It is, however, unclear what has led to this situation.

‘There won’t be any sky train in Ghana, it’s not possible’ – Amewu

'There won't be any sky train in Ghana, it's not possible' - Amewu