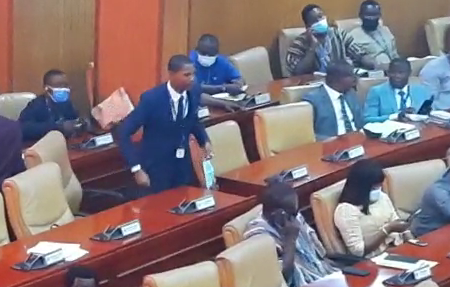 The Member of Parliament for Madina, Francis Xavier-Sosu, has been sighted in Parliament, a day after he failed to honour a criminal summons brought against him by the Ghana Police Service.

The MP was summoned by the court following several failed attempts by the police to arrest him for allegedly breaching the law during a recent demonstration by residents of Oyarifa and its environs over bad roads.

The MP has however failed to show up in court on two occasions.

A letter, signed by a Deputy Clerk of Parliament, Eric Owusu Mensah, and addressed to the Registrar of the Court noted in response to a hearing notice that Mr. Sosu was still on Parliamentary duty, and out of the jurisdiction.

According to the letter as read by the Court Clerk on Tuesday, Francis-Xavier Sosu is “attending at the proceedings of the 3rd Meeting of the 1st Session of the 8th Parliament which commenced on Tuesday 26th October 2021, and is also currently representing Parliament and the country in a conference in the United States of America”.

The MP organised a demonstration exercise on October 25, 2021, for some of his constituents to express their displeasure over the poor nature of their roads.

The exercise came off amidst the blocking of roads and burning of tyres, as well as alleged destruction of public property.

Francis-Xavier after failing to honour police summons accused the security agency of being disingenuous with their account of events.

Mr. Sosu in a statement insisted that he was neither involved in blocking roads nor destruction of property during the protest as alleged by the police.

It is unclear whether Sosu was indeed out of the country as suggested by the Speaker of Parliament; Alban Bagbin and Eric Owusu Mensah, given that he filed a motion seeking an enforcement of his fundamental human rights on Tuesday, November 16, 2021.

The motion captures the signature of the legislator.