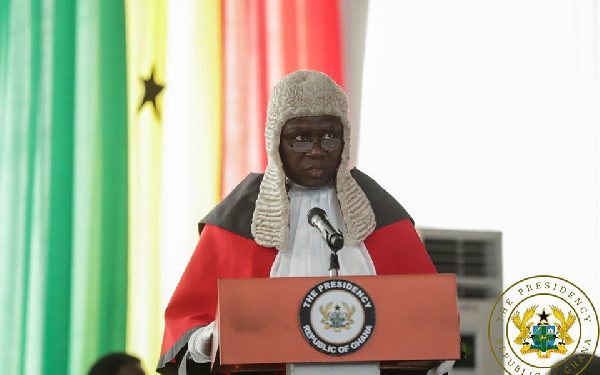 The Chief Justice, Kwesi Anin Yeboah has cautioned 16 newly admitted Magistrates against misconduct while on the bench.

He warned that they were not immune from sanctions and that their positions may be revoked based on any stated misconduct.

According to him, acts such as corruption, incompetence, gross insubordination, or abuse of office must be shunned by the Magistrates.

“Be reminded, that it is the duty of my office and the Judicial Council to ensure that you duly adhere to the rules of the profession. Your performance as Magistrates will be monitored and assessed from time to time as mere stewards or trustees exercising power on behalf of the good people of Ghana.”

“You are therefore not immune from sanction, and your conduct may be subjected to disciplinary measures should it be called into question. Conducting your court business in a proper manner is the only way to avoid sanction”, the Chief Justice urged.

Chief Justice Anin Yeboah was speaking at their swearing-in ceremony on Friday at the auditorium of the Law Court Complex in Accra.

There, he also charged the Magistrates to treat all persons who access the Courts of the land with civility and respect.

“Persons who access the courts, as a matter of necessity, must be treated with civility and respect and their needs attended to in a timely manner. This is in conformity with current global standards and best practice, which requires that Public Service Officials conduct public business with professionalism.”

“Therefore, as Magistrates of the Court of the first instance, clothed with the power to make summary judgments, you will encounter all manner of persons which requires utmost professionalism to serve their justice needs.”

He thus urged them to as justice bearers, apply the law impartially, and within the rule of law, and provide each person a fair and unprejudiced hearing while abiding by the Oaths they have sworn and the Code of Conduct for Judges and Magistrates.

CITSYS.com: Providing a one stop shop for IT software solutions