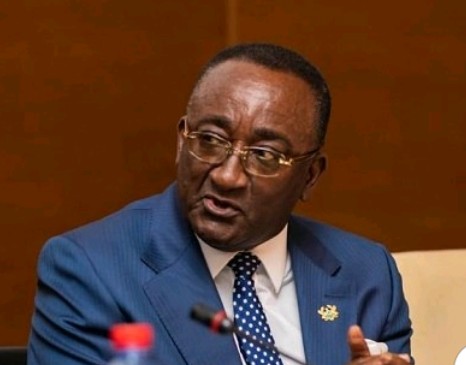 The Minister for Food and Agriculture, Dr. Owusu Afriyie Akoto, was, on Wednesday, December 1, 2021, compelled to wear a tie before being in Parliament amidst a heated debate on parliament’s approval of the 2022 budget statement.

The Minister was seen in the house wearing a suit without a tie to complete his dressing, as the rules of parliament require.

This was brought to the attention of the First Deputy Speaker by the Member of Parliament for Adaklu, Governs Kwami Agbodza.

He thus asked the Speaker to order the Minister to go out and dress properly before coming to the house.

“I can notice on the side of the Majority, a former senior colleague of the house the current Agric Minister is not properly dressed, and I want you to direct him to get out and come back to the house properly dressed.”

“As it is, he is not properly dressed to be in the chamber. It’s a convention in this house that when you wear a suit, you must add a tie.”

According to him, the request for the Minister to be ordered out is shameful and should be dismissed.

“We stay in Ghana and in Africa, and we always talk about colonialism and neocolonialism. Mr. Speaker, the Speaker of the British Parliament has ruled that a Member of Parliament can enter the house and without wearing a tie.”

“We watch them always ask questions without wearing a tie, and we sit in Ghana and shamefully say that someone isn’t wearing a tie. It’s shameful and you must dismiss it.”

Regardless, the Minority Chief Whip, Mubarak Muntaka, rejected the arguments made by Dan Botwe.

“I am surprised that my friend who is a senior member of this house supported the dressing of the minister, who is improperly dressed.”

The First Deputy Speaker, sitting as the Speaker, agreed with the Adaklu MP and ruled that per the practice of the House, MPs are supposed to wear ties once they wear suits.

He explained further that MPs are only free not to wear ties when they choose to wear African prints.

The Minister subsequently rushed out for a minute to put on a tie and returned to the chamber.