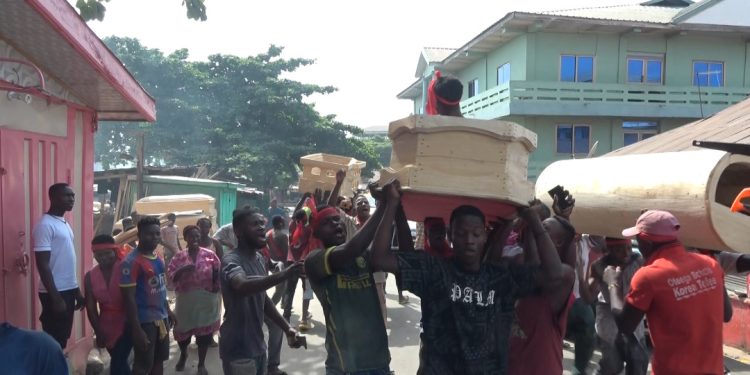 Coffin makers at Fante New Town, a suburb of Kumasi in the Ashanti Region, are protesting a planned eviction by the Kumasi Metropolitan Assembly (KMA) from their present place of work.

The over 500 workers say they will resist the eviction if the Assembly fails to give them an alternative place to settle.

For about 20 years, one of the coffin makers, Kofi George, has made coffins in his shop located at Asem which is the hub of Coffin making in the Ashanti Region.

The final work is sent to the market for sale, and each coffin comes at different sizes and prices. He has not only spent two decades making coffins, but has also trained others in the business.

“I have trained about six to seven persons in this work.”

His biggest nightmare is now an imminent eviction of more than 500 of his colleagues here.

“Some people came around and said they were evicting us, and they will use this place to build some stalls. We had a meeting with them, but it was inconclusive. They came back yesterday [Tuesday] with the Assembly Member for this area and said we have been given up to 18th December to move from this place. They have even done some markings of our structures. We still don’t understand what is going on, and we have decided to talk to the authorities. We have also decided to put red bands to show our seriousness about the matter.”

Bereaved families travel far and near to buy coffins from the area to bury their loved ones. Coffins from Asem are regarded as some of the best, and the market employs hundreds in the value chain.

The coffin makers are known by many, and the eviction is not good news for all interested parties.

One of the aggrieved Coffin Makers said, “All we are telling the authorities is that we have nowhere to go. We will only leave this place if the government finds a proper place for us to relocate to. If we are evicted from one place to a place, even in the Volta Region, we will not lose touch with our customers. I have customers in Cote d’ Ivoire, Aflao, and Burkina Faso. If they should hear I am being evicted from this place, they will want to take their monies from me and that will create a problem for me.”

The KMA maintained that it is embarking on a project to give the place a facelift to allow the coffin makers to continue their operations.

The Assembly Member for Asem Electoral area, Kusi Serebour, told Citi News that authorities are only carrying out a temporary relocation of the workers to give the area a facelift.

“KMA is going to develop the place for them to continue doing their coffin work there. It’s not that we are evicting them from the place, but rather we are giving it a facelift,” the Assembly Member said.

The coffin makers remain skeptical about the Assembly’s explanation on the matter.

GOIL withdraws membership from AOMCs over allegations of government interference