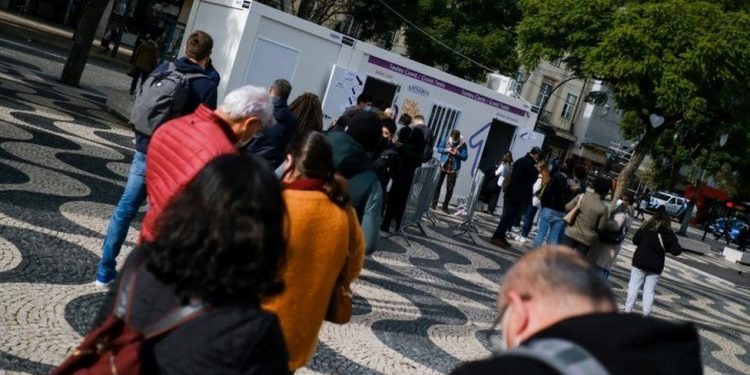 European leaders are reinstating coronavirus restrictions as the new Omicron variant continues to spread through the continent.

Omicron is already the dominant strain in many European countries.

The surge will push health systems towards the brink of collapse, the World Health Organization’s top official in the continent has warned.

Hans Kluge said “another storm” was coming and governments should brace for significant increases in cases.

Germany announced that from 28 December, limits will return that restrict private gatherings to 10 people and nightclubs will close. Football matches from that date will also be played behind closed doors.

“We cannot – and must not – close our eyes to this next wave which is beginning to loom over us,” he added.

Meanwhile Portugal ordered bars and nightclubs to shut from 26 December, and made working from home obligatory from that date until 9 January.

Outdoor gatherings would be limited to 10 people.

In the UK, Prime Minister Boris Johnson has ruled out any new restrictions for England before Christmas, but Scotland, Wales and Northern Ireland have all announced curbs on social mixing.

In Sweden, bars, cafes and restaurants will only be able to serve seated guests from Wednesday, and people are being asked to work from home if possible.

Health Minister Lena Hallengren said she expected Omicron cases to rise and warned that “the burden on the health care system is increasing”.

The Netherlands has already brought in tighter restrictions, announcing a strict lockdown on Monday, but BBC Europe correspondent Nick Beake says other European leaders want to delay tighter controls until after the festive period if possible.

Europe has already seen more than 89 million cases and 1.5 million Covid-related deaths, according to the latest EU figures.

Omicron was first identified in southern Africa last month but has now spread around the globe. Data from around the world suggests Omicron may be more infectious, but there is no evidence yet that it causes more serious illness.

It has been detected in at least 38 of the 53 countries in the WHO’s European region – which includes Russia and Turkey – and is dominant in several, the organisation says.

“We can see another storm coming. Within weeks, Omicron will dominate in more countries of the region, pushing already stretched health systems further to the brink,” said Mr Kluge, quoted by Reuters.

“The sheer volume of new Covid-19 infections could lead to more hospitalisations and widespread disruption to health systems and other critical services.

“Governments and authorities need to prepare our response systems for a significant surge.”