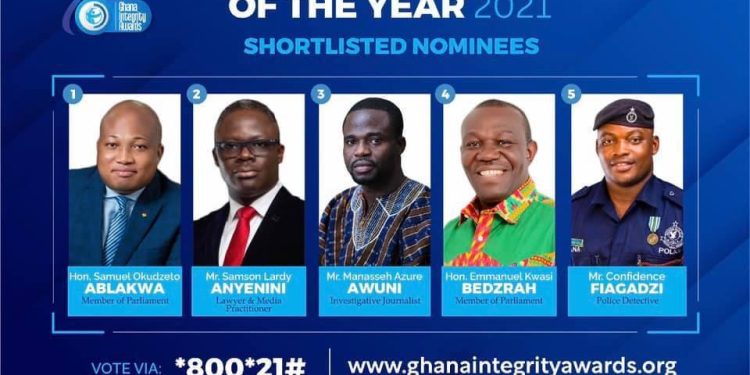 A Detective CID at the Kaneshie Police Station and investigative journalist Manasseh Azure Awuni, have been crowned the Ghana Integrity personalities of the year 2021 at the second edition of the Ghana Integrity Initiative Award held at the Alisa Hotel in Accra

The Award was held on the occasion of the United Nations’ Anti-Corruption Day.

Forty persons were nominated or submitted entries while fifteen made it to the next stage.

After a vigorous selection process, five outstanding personalities made it to the finals.

Hon. Okudzeto Ablakwa’s selection was based on how he brought the Oslo Chancery scandal to light which saved the taxpayer about 4.2 million dollars.

Again, his exposure of the Frontiers scandal leading to a parliamentary bi-partisan enquiry into the scandal earned him the nomination.

Samson Anyenini, host of Newsfile on JoyNews got nominated for his ‘Samson’s take’ initiative and his consistent advocacy on corruption-related matters including the controversial removal of the Auditor General, Yaw Domelevo from office

Investigative journalist, Manasseh Azure Awuni on his part was shortlisted for his 2019 and 2020 investigative documentary titled ‘Contracts for Sale’, which dominated the Ghanaian media landscape and public discourse.

The investigation revealed how government contracts were being sold by a company owned the CEO of the Public Procurement Authority, PPA.

Manasseh later investigated the Head of Legal Affairs at the Food and Drugs Authority who demanded 100,000 dollars from the CEO of COA FS, a local food supplement manufacturer.

The MP for Ho West, Emmanuel Bedzra, was nominated for his advocacy both on the floor of parliament and other fora regarding corruption related practices which resulted in his appointment on the board of the Global Organization of Parliamentarians Against Corruption (GOPAC) in 2019 in Qatar representing the African Region.

He instituted the ‘AGOO’ initiative to engage his constituents to inform them about works ongoing in parliament and projects undertaken with allocations received as MP.

Detective Lance Corporal Confidence Fiagadzi, a police officer at the CID office, was nominated on two considerations. The first was an alleged case involving an STC official, and the second has to do with a case involving police officers who extorted GHS 20,000 from an individual.

In both instances, he demonstrated integrity when he rejected an amount of GHS 4,000, and GHS 2,500 in the two cases.

All the five nominees were recognised while two won the integrity personalities of the year.

Out of ten institutions that made it to the final stage out of the twelve that were nominated, only three were honored on the night.

The Internal Audit Agency won the award for Effective Internal Control Enforcement put in place which has since saved the taxpayer some GHS 387 million.

The National Identification Authority (NIA) won the Efficient Public Service Delivery for their integration platforms initiated to rope in other institutions like SSNIT among others.

The National Commission for Civic Education (NCCE) was awarded for Transparency and Social Accountability.