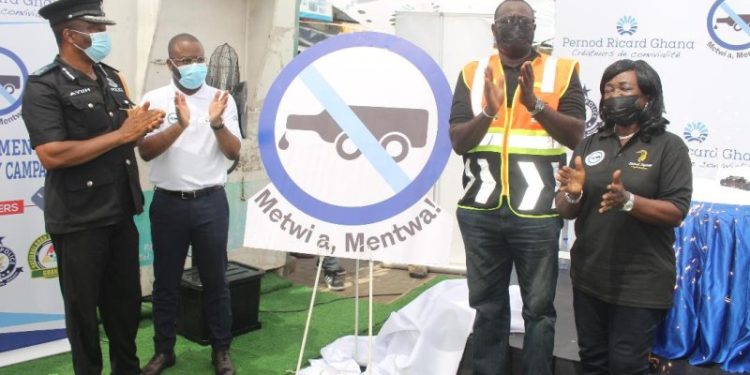 The three-week campaign is in collaboration with Street Sense Organisation (SSO), a road safety educator, National Road Safety Authority (NRSA) and the Motor Traffic and Transport Department (MTTD) of the Ghana Police Service.

It is to complement the efforts of the MTTD and partners to reduce accidents on the road, especially during the festivities.

The launch is a precursor to a series of road safety education campaigns, targeting one thousand commercial drivers in the Greater Accra Region, that will be undertaken prior to the Christmas festivities.

Mr. Sola Oke, Managing Director, Pernod Ricard Ghana and Western Africa, said the campaign was one of their programmes under the Responsibility Hosting pillar of their Sustainability and Responsibility Goal (UN-SDGs 3) – Ensure healthy lives and promote well-being for all at all ages.

He said they were optimistic that, creating awareness among commercial drivers to the dangers of drink-driving, was one way to help reduce deaths and injuries from road traffic accidents.

He, therefore, reaffirmed the company’s commitment to fighting alcohol abuse and creating a better way to live and work together.

He appealed to both drivers and pedestrians to obey road traffic regulations to curb road accidents.

He said alcohol only gave dead/false courage and urged all drivers to pledge to have zero accidents during the festivities and beyond.

“Drivers must change their attitudes, minimise their speed and stop the killing on our roads,” he said.

Mr. Felix Owusu, Manager in charge of Planning, NRSA, said for January to October this year, over 2,000 people lost their lives through road carnage.

He advised drivers to leave spaces between them and the vehicle ahead to avoid accidents.

Sampson Addoye, the National Coordinator of SSO, said the majority of road accidents were through careless driving and urged drivers to be responsible when drinking to safeguard the lives of those on board.

“What is it worth to maim and kill people through dangerous driving,” he asked.

Mr. Vicent Alhassan, Secretary at the Circle Neoplan Station, said a good driver is the one who drives with care without any accident.

He thanked the organisers for choosing the Neoplan Station and pledged their commitment to continue to jealously guard their records of safe driving.

Pernod Ricard was incorporated in Ghana in July 2013, as a subsidiary of Pernod Ricard, the number two worldwide producer of wines and spirits.

Metwi a, Mentwa, is a coined expression in Twi, loosely translated as, If I drink, I will not drive.

‘I didn’t snatch Speaker’s seat; I was only preserving it’ – Ashaiman MP