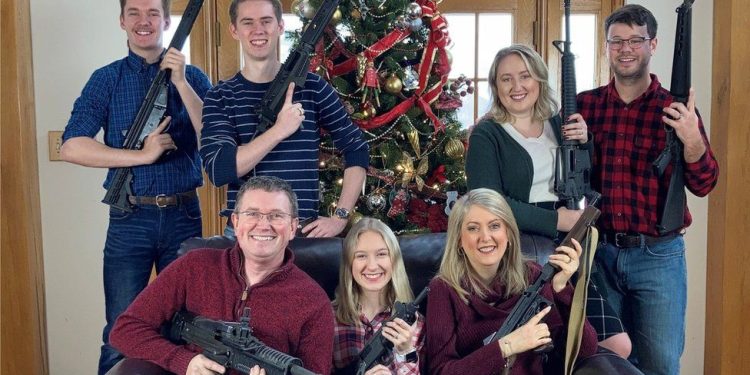 A US congressman has faced a barrage of criticism after he posted a Christmas photograph of his family posing with military-style rifles, just days after a deadly school shooting.

The post has been condemned by a host of families affected by gun violence, plus figures on both sides of politics.

In the wake of the controversy, Mr Massie has retweeted messages of support, and also those criticising him – directly engaging with several Twitter users who said he was “tone deaf” and “insensitive”.

In response to one person who wrote the “bar was on the floor, but somehow you managed to tunnel underneath it,” the 50-year-old quipped that “The BAR is under the couch,” referring to a type of military assault rifle.

The photo was posted days after a school shooting in Michigan which left four teenagers dead and seven people injured after a 15-year-old student allegedly went on a rampage using his father’s gun.

The suspect’s parents have been charged with involuntary manslaughter for failing to heed multiple warning signs before the tragedy. They have plead not guilty.

It is was the latest in a string of shootings in the US that has lead to fierce debate about gun rights and laws.

The families of students killed in previous school shootings have spoken out against the post.

Fred Guttenberg’s daughter Jaime was killed in the Parkland high school shooting in Florida in 2018 – one of the worst school attacks the US has seen.

He posted a photo of Jaime, and also a photo of her gravestone under the congressman’s post.

Manuel Oliver, whose son Joaquin also died in the Parkland attack, told CNN that the tweet was in “the worst taste ever”.

Several figures from the Republican party also condemned the post.

Adam Kinzinger, a Republican congressman from Illinois, mocked him for displaying a “gun fetish” with the post.

And Anthony Scaramucci, who was briefly former President Donald Trump’s communications director, tweeted that he would fund any potential candidates running against Mr Massie in next year’s congressional elections.

Despite the criticism, several prominent names in US conservative circles have defended the congressman.

The Colorado representative and gun-rights activist, Lauren Boebert tweeted: “That’s my kind of Christmas card”. Another Republican, Jose Castillo wrote “All I want for Christmas is… more elected officials like Thomas Massie.”