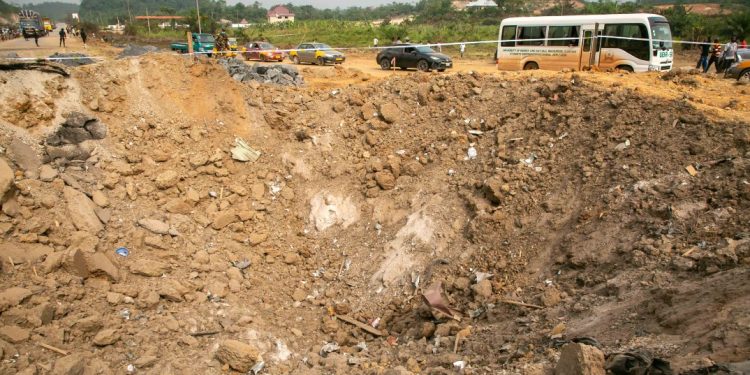 It has emerged that the persons who unfortunately lost their lives following the gory explosion at Appiate, Bogoso included a seven-month-old baby.

The baby, believed to be the youngest who perished, died together with 12 other individuals after the blast that left over 50 persons with varying degrees of injuries.

Clinical Coordinator and Head of Emergency Team at the Apinto Government Hospital, Dr. Joseph Darko, pegged the death toll at 13.

“We haven’t recorded any death yet at our facility [today], and the doctors at the other facilities have also not recorded any death yet. But the figures haven’t changed. It’s still the 13 people who have died. Yesterday, at the health facility, we certified about nine adults and one seven-month-old baby,” he said on Eyewitness News.

While 13 people died from the explosion, some 59 people are also said to have been left with varying degrees of injury as a result of the explosion.

Dr. Joseph Darko said most of the injured persons are responding to treatment.

“By and large, the patients are still responding to treatment. Some were sent to the theatre to be worked on. In my facility, we have one adult and a baby. A lot of them are doing well, but we have a few in critical situations, but plans are underway to airlift those whose injuries are quite critical,” the doctor added.

The Ministry for Information had earlier announced the number of fatalities as 17 but after briefings from the Police and other emergency security officials and chiefs, the National Emergency Response Mechanism team led by the Vice President, Dr. Mahamudu Bawumia, said so far 13 people had passed on, with the numbers likely to change if new information comes through.

Dr. Bawumia told pressmen on Friday that, some 179 families had been directly affected by the incident.

“So far we have heard at least 13 people have died. The numbers would change as we get more information. We hear that there are about 59 or so injuries and 179 families that have directly been affected by this disaster.”

He gave assurances that the government will do all it can to support the affected families, to ensure that normalcy is brought back to the town.

Meanwhile, the Vice President, on behalf of the government visited the Bogoso Catholic Parish Relief Centre where over 300 of the displaced persons are being catered for and donated mattresses, bags of rice as well as GH¢200,000 for the upkeep of survivors.