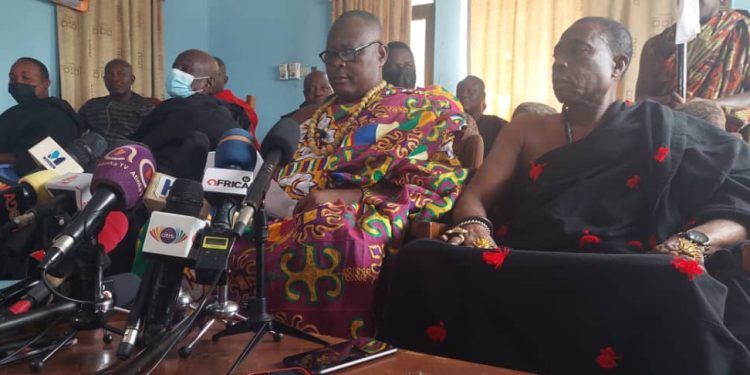 The Ada Traditional Council has condemned the January 13, 2022 attack on a community radio station in the area known as Radio Ada by unknown persons.

At a press conference held at Ada, the overlord of the Ada paramountcy and his elders, said they trust the Ghana Police service to apprehend the perpetrators through a thorough investigation.

The traditional council however said the National Media Commission and the National Security must keep an eye on the programs aired by the station in order to ensure the content aired are decorous.

Nene Obichere Agudey III, the Manklalo of the Ada Traditional Council in a statement he read on behalf of the overlord, Nene Abram Kabu III, noted that some radio programs are targeted and deliberately sanctioned to incite violence among the traditional authority and the youths.

According to the chiefs, frequent discussions on the airwaves have been one-sided in an attempt to impugn the reputation of the chiefs, who handed the Songor salt project to Electrochem Ghana limited for salt mining.

Despite making such concerns, they condemned the recent attack on the radio station by some thugs and the act of vandalism that took place.

Speaking on Eyewitness News, Deputy Station Manager of Radio Ada, Noah Dameh, disclosed that the station’s broadcast on the project has become of concern to the indigenes which brought on the assault suffered by some of his employees and the destruction of some equipment belonging to the station.

There have been series of demonstrations and subsequent arrests of some youths by the police, but the situation doesn’t seem to die down.

On the other hand, the Electrochem Ghana Limited, a subsidiary of the McDan Group of Companies indicated that, they are investing about 20 million dollars in a sports complex facility in the area as part of its corporate social responsibility aside from offering jobs to the teaming youth in an attempt to bridge the widening gap over the contention of the project.