Concerned university students to demonstrate this week over UTAG strike 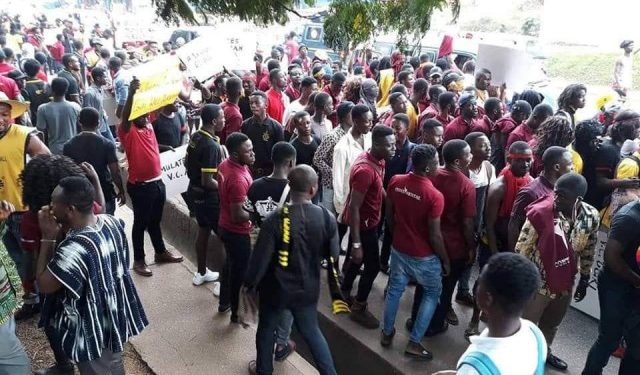 The Coalition of Concerned University Students (CoCUS), says it is set to stage a demonstration against the government over its inability to address the ongoing strike by university teachers.

The industrial action of UTAG has entered week four with a possible shut down of all public universities if the government does not with immediate effect find a solution to the impasse.

Speaking to Citi News, the lead convener for the Coalition, George Kofi Abuah, said the group will petition the presidency and other relevant bodies to intervene in the matter.

“We have acquired all relevant requirements for the demonstration, we have approval from the Regional Command of the Ghana Police Service on our peaceful protest. Hopefully, by tomorrow [Tuesday] midnight, key details regarding the intended demonstration will be concluded by the close of the day and communicated. But for now, we are sure it will be held this week.”

“We already pleaded with the government to intervene. But we still haven’t heard from them. Does the government expect university students who have paid accommodation and school fees at exorbitant prices to sit idle all the while?” he quizzed.

Public universities across the country risk being shut down as the strike by members of the University Teachers Association of Ghana (UTAG) enters its fourth week.

The strike by UTAG is to demand better conditions of service, which university teachers have been pursuing for years now.

The regulations guiding public universities indicate that where there are no teaching activities for 31 days after academic activities are to resume, the school must be closed down.

Meanwhile, the court is expected to hear a case brought by the National Labour Commission, NLC, against UTAG for failing to call off its strike which it had declared illegal.