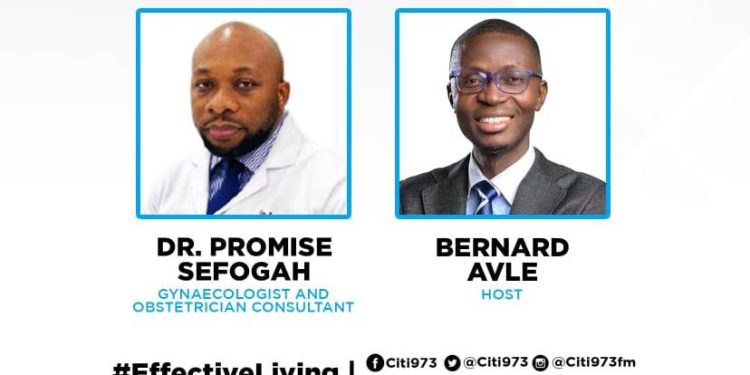 Dr. Promise Sefogah, an Obstetrician Gynaecologist and consultant at Shape Healthcare Specialist Medical & Fertility Centre has called on men to join their wives in seeking healthcare together in their quest to bear a child after marriage.

According to him, men are equally responsible for the inability to conceive as women, and so it is important that couples work together in seeking medical attention.

“In this part of the world, about half of the [fertility] cases are mainly from the man’s side. It [Diagnoses and treatment] works better when men join forces with their wives to seek care together. Sometimes you issue the request to be given to the husband and the man won’t do it because of the mentality that they are okay, and it is the woman’s fault,” he said.

He explained that in most cases where the inability to conceive is found to be with women, the challenge is related to their fallopian tubes.

“In our environment, about 60% of women who are not able to conceive in the presence of everything being okay, is related to tubal factor.”

On treatment, he said, if a diagnosis shows that the fertility challenge has to do with ovulation, there are medications that can help.

“If it has to do with the tubes being blocked, some of it we are able to flush them open, some may require surgery, some are beyond repairs, so we have to perform the fertilization process in a laboratory; In vitro fertilization.”

He said in cases where a couple is unable to conceive due to a fibroid in the woman, further assessments are done and if confirmed that removing it will be a better option, such a process is undertaken.

On some of the common causes of infertility amongst men, Dr. Sefogah mentioned overexposure to heat.

“If for some reason you work in a hot environment, sitting on a car engine [in the case of the driver’s mate], or long-distance drivers [you could be affected]. That is a common problem for people in that group of profession.”

“Even when you wear a lot of tight underwear or black underwear [it can be a problem],” he said.

He said having abnormal blood vessels around the testes “or if, for some reason, someone is exposed constantly to radiation, it can affect sperm production.”

He said in cases where the cause of infertility is found to be behavioural, patients are assisted to change their lifestyles.

“We are having a lot of our women now in pursuit of career and are delaying childbearing which is legitimate. So if for some reason they think they’ve crossed 35 and don’t see themselves getting pregnant soon, we can simulate them, and freeze their eggs and if you finish everything and at age 49 you want to start having babies, you have eggs that are 35-year-old that we can use. That is fertility preservation,” he noted.

He said the same process is applied when a man or woman is due for cancer treatment (chemotherapy).

“Once you are systematic, you find the problem and solve it,” Dr. Sefogah noted while talking about the success rate of the process.

Listen to the podcast below:

Citi97.3 · Family Health: The rising cases of infertility and what to do about it – Dr. Promise Sefogah
ShareTweetSendSend
Previous Post