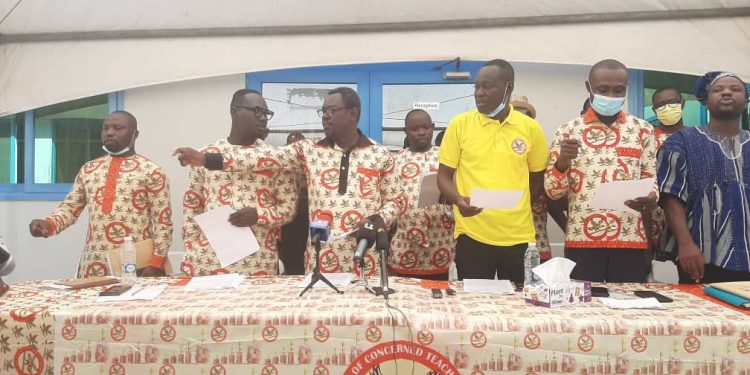 The unions have identified, a number of things, which, they say, if not immediately addressed, will have a negative impact on teaching and learning.

These were contained in a statement issued by the National Secretariat of the groups, highlighting what they say are the recent outbursts and conduct of some unscrupulous members, whose actions are becoming inimical to the advancement of the unions.

Among the things mentioned, they cleared the air on internal election wrangling, court cases, financial irregularities, procurement breaches, alleged removal of some executives from office, and the dissolution of the National Executive Council.

On elections, for instance, based on a court injunction, the two groups say, they have immediately halted the electioneering processes after being served with a contempt application on the elections.

“The elections are therefore suspended until the Court matters are determined”, the statement said.

It said, none of the officers of the union, is holding on to power illegally.

“It is strange, in the circumstance, for anybody to hold the view, that having succeeded in putting a clog in the wheels of the electoral process, through a legal process, a group of persons not oblivious of the current state of affairs would turn round to accuse the leadership of deliberate failure to conduct an election as anticipated under the Union’s Constitution.”

In addition, the release said the finances of both CCT Ghana and CCT Fund have been externally audited from 2014 to date.

The groups were worried that portions of their accounts have been copied and being shared on social media platforms with a lot of misinterpretations.

“In particular, there is an audio in circulation that the 2020 Accounts declared an amount of about GH¢6.5 million as bad debts. We cannot tell if the one who created the said audio was present at the AGM, and whether this interpretation is out of ignorance or mischief. We prefer the latter-Mischief!  Indeed, such misinformation is bound to raise many emotions, concerns, and questions from our members.”

The leaders have thus cautioned its members against disintegrating the union, advising that, such negative and illegal actions will put the Union into a state of disarray.

“We continue to fight for the welfare of our members and teachers as a whole. We urge all Officers and Members of the Union to stand resolute with us in these trying times. We welcome all constructive criticisms as the same put leadership on the right track.”

To resolve the cracks in the groups, leadership has taken the following steps to bring tensions under control:

1. A report has been made at the Ghana Police Service CID Headquarters to investigate those individuals on the use of forged/faked CCT Ghana Letterheads in propagating their illegal agenda.

2.  A report has been made to the employer of the illegal conduct of such teachers/members.

4. There are other suites including contempt application on those running commentaries on both Traditional and Social media to defame the CCT GH and the CCT Fund and in an attempt to prejudice the case before the Court.