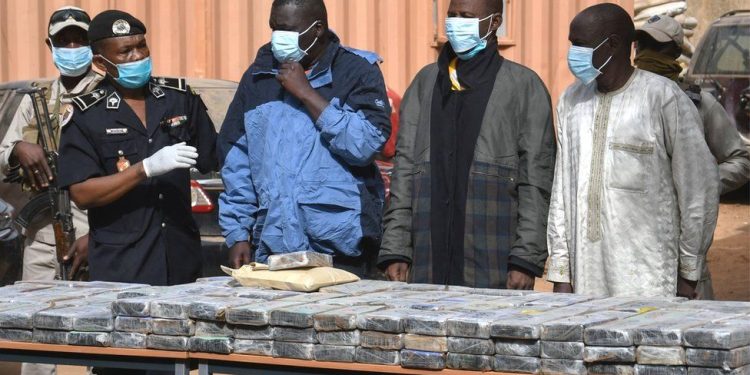 A local mayor and his driver have been arrested in a desert in northern Niger with more than 200kg (440lbs) of cocaine in their vehicle, police say.

The two suspects, who have not been named, were allegedly transporting the drug to Libya after it had been smuggled into the country from Mali.

Niger’s drug policing agency said it was the largest quantity of cocaine seized in the West African country.

Drug smuggling and police seizures are becoming more common in the region.

Niger’s Central Office for the Repression of Illicit Drug Trafficking (OCRTIS) said on Wednesday that police had been aware of a large quantity of cocaine being transported through the country towards Libya, and had been following the trail.

“[The investigation] led to the seizure on 2 January of 199 bricks of cocaine – weighing a total of 214kg – in a vehicle belonging to the mayor’s office in Fachi,” OCRTIS spokeswoman Nana Aichatou Ousmane Bako said.

The vehicle had left Fachi and was heading towards Libya for the town of Dirkou when it was stopped on Sunday.

“It’s the first time that our country has seized such a big quantity of cocaine,” Ms Bako said, adding that the drugs were heading for Europe, where they had an estimated street value of about $19m (£14m).

The mayor and his driver were taken to Niger’s capital, Niamey, for questioning.

Fachi is an oasis in the Tenere desert about 400km (250 miles) north of the town of Agadez. It is known as a trading centre for salt and dates.

The region is used as a route for multiple types of trafficking – such as moving drugs between South America and Europe and migrant smuggling.