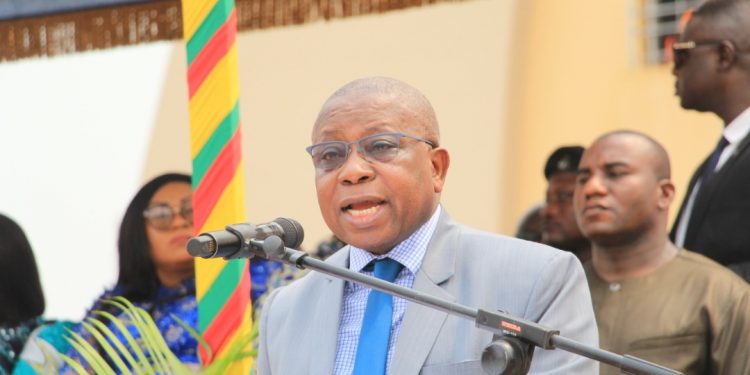 All government and public agencies, including Ministries, Departments and Agencies (MDAs), are to strictly enforce a ‘no vaccination, no entry’ policy at their premises from tomorrow, Wednesday, January 5, 2022.

The staff of those organisations, as well as visitors, will be expected to show proof of vaccination by producing their vaccination cards before being allowed into those premises.

The new directive forms part of measures at controlling the spread of the coronavirus disease (COVID-19) and help improve the vaccination exercise in the country.

Ministry of Health leads the charge

Ahead of that mandatory vaccination policy coming into effect, the Ministry of Health has demonstrated its leadership in the sector by directing that only people vaccinated are allowed into its head office from today, Monday, January 4, 2022.

Under the directive, everybody entering the MoH building for whatever purpose, including staff of the ministry, must show their vaccination cards before being allowed access.

Explaining the directive to the Daily Graphic, the Minister of Health, Mr. Kwaku Agyeman-Manu, said as the government agency at the forefront of health delivery, it was critical that it led by example.

“Effective Tuesday, January 4, 2022, everybody entering the Ministry of Health building must be vaccinated before they are admitted. Valid vaccination cards will be, therefore, required for entry,” he said.
He said very soon the date on which the vaccine mandatory protocols would come into effect would be announced and called on all stakeholders, particularly the media, to be advocates, defenders and supporters of the protocols because they were being introduced solely in the interest of public health.

Mr. Agyeman-Manu further indicated that the ministry was doing all it could to ensure that at least 20 million people, required to reach herd immunity, were covered in the vaccination exercise.

He said the policy of mandatory vaccination was expected to start with selected groups of people, including all workers in government institutions, all commercial drivers and patrons of selected events.

Others were members of the three arms of government, all healthcare workers, all security personnel and all students and staff of secondary and tertiary institutions, he said.

“These people were those given priority even when the country had only a few vaccines, and so we expect all of them to be vaccinated,” he said.

He urged the public to go to the vaccination centres for their jabs, saying the country had enough vaccines in stock.

“The whole point is that we will not make it compulsory, but if you decide not to get vaccinated, the government will deny you access to public places and facilities. The government owns all public spaces in the country, and so it has the power to restrict access.”

“So it says when the protocols come into effect, you cannot come to school as a student or a teacher if you are not vaccinated. So you can choose to get vaccinated and come to school, access public facilities or stay at home.”

“That is the challenge at hand. And if we don’t do some of these things, we will not get people vaccinated to protect the population.

“Wherever you are, be advocates of vaccination and safety protocols. We should take COVID-19 more seriously. Over the last few weeks, we have moved from an active case count of a little over 600 to over 10,000 cases,” he said.

That, he said, showed a very big surge and an indication that the country was apparently in its fourth wave.

“We don’t know where it will take us, and so we must be extra cautious. The only way out is to ensure that almost all of us and, eventually, the entire population is vaccinated while continuing strict adherence to the safety protocols.”

“The same protocols we used at the beginning of the pandemic that became the game changer are what we must continue to uphold,” he said.

The Health Minister added that the government had distributed ultra-low refrigerators to all regions for the storage of all vaccines approved for use in the country.

“All regions now have facilities to store vaccines that have been approved in Ghana,” he said, adding that the vaccines had proved to be the foremost protection against COVID-19, as “they have a say on all the variants”.

He indicated that for the new variant, the Omicron, studies had shown that people who had the jabs had mild symptoms, with many of them not seriously sick, as hospitalization and deaths also reduced drastically with the vaccines.

Mr. Agyeman-Manu said although the national vaccination month, last December, had ended, vaccination was ongoing vigorously and appealed to all who were yet to get jabs to quickly do so.

“We cannot overemphasize the importance of vaccination in health. It is evident that the single most important public health intervention contributing to the health of children and adults all over the world is vaccination. Vaccines, in general, are a great tool in preventing diseases,” he said.

He said for COVID-19, vaccines had become an essential tool in the fight against the disease, offering real hope of bringing the pandemic under control.

The implementation of the vaccine mandate to restrict access to public places for people without vaccination cards is expected to boost the update in the number of people taking the jabs.

The GHS has set up a centre at the Kotoka International Airport (KIA), where an average of 100 positive cases are detected a day, to vaccinate arriving Ghanaian and resident passengers without the jabs.

Since Sunday, December 12, 2021, all persons 18 years or above arriving in the country have been required to provide evidence of full vaccination for COVID-19 as part of reviewed national COVID-19 preventive protocols at the KIA to control imported cases.

Nurudeen Mohammed writes: The JFK factor- the position of the General Secretary