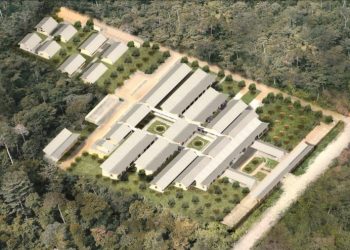 The government says 67 of the hospitals under the ambitious Agenda 111 initiative will commence by the end of March 2022.

The Agenda 111 project is the government’s plan to ensure that 101 outstanding districts will be provided with hospitals in addition to 10 selected regional and specialized hospitals.

A manager at Hospital Infrastructure Group, the project managers for Agenda 111 hospitals, Kwabena Nyarko, gave an update on how the project is panning out as of February 9, 2022.

“We went through a tender process, the contractors have submitted their tender, and they are being evaluated. After this is done, we will run them through a value-for-money process and all the commercial arrangements will go through Parliament.”

“We believe that hopefully by the end of March, we will have at least 67 of these sites that are working on the agenda 111 district hospital projects.”

He noted that each hospital has a completion time of about 18 months, “and the 18 months is from when the  project starts from a particular location.”

He also indicated that though they have identified 92 of the sites for commencement of work, land acquisition continues to be a major hindrance.

“There are other areas that as we speak, we still don’t have sites for them, and those are primarily in the Greater Accra Region. For example, in the Nima area, we need 15 acres. There are also some areas where we get the sites from the District assembly but face some issues with traditional authorities.”

“We are looking at some alternatives for places we are struggling to get sites,” he added.

Kwabena Nyarko said the government has paid 138 of the contractors the mobilization fee to begin work.

“The plan is to pay the contractors some mobilization. 10% of their contract sums will be paid as advanced mobilization. 139 of those have been paid. We are mobilizing to site.”

The Agenda 111 project is part of a plan by the Akufo-Addo administration to ensure that 101 outstanding districts will be provided with hospitals in addition to 10 selected regional and specialised hospitals.

It is expected to take 18 months to complete from the commencement of each unit, with a funding of $100 million from the government through the Ghana Infrastructure Investment Fund (GIIF).

Paa Grant was father of Gold Coast politics; put his image on our currency - Atta Akyea