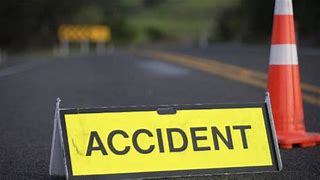 An accident involving a cargo truck with registration number GE-819-Y on Tuesday, February 15, 2022, run over a woman believed to be in her early 20s killing her instantly at Bawjiase in the Central Region.

The accident, according to eyewitnesses, happened in front of the Bawjiase Police station after the cargo truck which had a brake failure run into an unidentified woman who had just alighted from a taxi, killing her instantly.

“He was headed towards Swedru, and as soon as he climbed the hill, his brake suddenly failed him, and the car started reversing. There was a taxi driver right behind him, he couldn’t move the car, so the passengers decided to come out and run for their lives. Just as they were running, the truck unfortunately crushed one woman to the floor, killing her at the spot.”