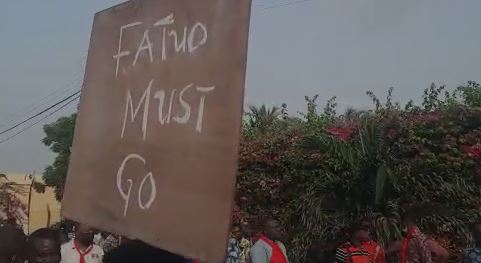 Workers of Textile Ghana Limited, producers of GTP and Woodin fabrics, have extended their demonstration into a sit-down strike as part of processes to demand the removal of their Managing Director.

A staff of the company, John Ackon, noted that work has come to a standstill until they receive a response to the effect that, their petition to have their Managing Director sacked has been heeded to.

The workers of the Textile Ghana Limited led by the Industrial and Commercial Workers Union on Thursday, February 24, 2022, demonstrated and presented a petition to the stakeholders of the company to get the Managing Director, Fatoumata Doro sacked from the company claiming she is incurring cost on the company and not respecting the collective working agreement of the staff.

The workers claimed, among other things, that their MD had disregarded their collective working agreement that spells out their terms of working conditions.

According to John Ackon, nothing will change their minds until they receive what they are demanding.

“The reality is that workers are currently at work but are not working because we are yet to receive a result that the MD has been sacked. All our shops across the country are also not working.”

Meanwhile, all attempts by Citi News to get the reaction of the Managing Director of the company, Fatoumata Doro, have proven futile.

On Thursday, February 24, 2022, the demonstration to demand the sacking of the new MD began, seeing workers of about 600 in Tema decide to play football instead of working until the MD is sacked.

“We are agitating this morning because the new MD who came in about six months ago has decided to show us disrespect and disregard for our collective working agreement and also create fear and panic. For the first time, we have top-level management who have decided to join unions because of fear of the next action she (MD) will take. She has decided to renegotiate every package in the collective agreement just because she has the intention to sack people.”

“She is appointing friends and family and overburdening the institution. We won’t stop until she is gone.”