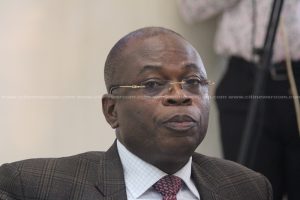 The Chairman of the Public Account Committee (PAC) of Parliament, James Klutse Avedzi, has chastised the Health Minister, Kwaku Agyemang-Manu for failing to appear before the committee to answer for infractions in the 2018 Auditor General’s report.

The Minister was scheduled to be at the Committee on Tuesday, February 9, 2021 but did not show up.

Mr. Klutse Avedzi is disturbed by the Heath Minister’s continuous ‘disregard’ for the committee.

“This Committee started work from 2021 to this year, he [Health Minister] appeared before this Committee only once. He was the former Chairman of this Committee, he was the one who had been inviting people and when people don’t come, he did not take it lightly. Now he, himself is doing exactly what he was against.”

Mr. Avedzi said the conduct of the Health Minister will be tabled before the House for sanctions over his disrespect towards the Committee.

“We have a Ministry who has a Minister and two deputies and none of them will appear before the Committee. You have spent public money, come and account for it. Your name appeared in the report of the Auditor-General which means that there is something wrong, so come and tell us how you would resolve the issue,” he added.

Close down universities until UTAG impasse is resolved - Eduwatch to Gov't