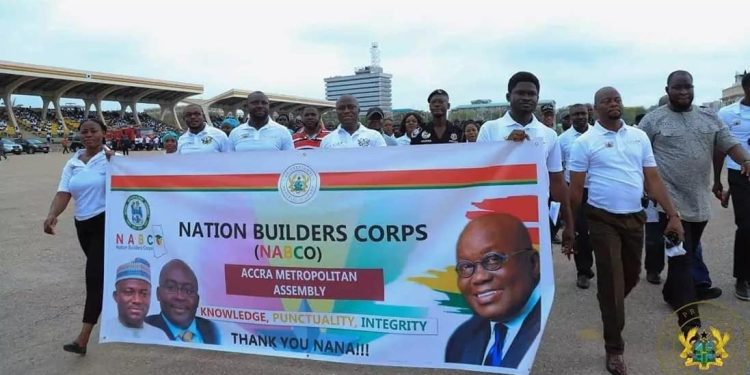 The Coalition of Nation Builders Corps (NABCO) will today, Thursday, February 17, 2022, embark on its planned demonstration to press home demands for government to pay the allowances of its members.

According to the coalition, the protest will be done despite government’s effort to pay two months of their arrears instead of the six months.

The group was supposed to embark on the protest on Tuesday, February 15, 2022, but postponed it today after a police order.

Speaking to Citi News, Patron of the Coalition of NABCO personnel, Nana Barima Asamoah said the demonstration is also to press home their demands for permanent jobs.

“The government’s promise to integrate us into the permanent NABCO job has now dissipated into an unpredictable promise of migrating us into a YouStart Program, which is yet to be launched. In fact, we are displeased with the government, and so we want to hold the Akufo-Addo government to account.”

He complained that the NABCO members had been abandoned by the state.

The Accra Regional Police Command says adequate security arrangements have been put in place for the demonstration.

The demonstrators will converge at the Obra Spot and commence with the demonstration  through to TUC intersection, the National Theater and move to Ministries police intersection and finally end at Independence square.

The Motor Transport and Traffic Department (MTTD) have also deployed personnel to assist with the management of traffic congestion that will emerge as a result of the protest.

“The General public is encouraged to cooperate with the police to ensure an effective traffic management during the period. In view of this, adequate steps have been taken to ensure the smooth conduct of the demonstrators throughout the agreed routes to safeguard the security of all”, the police said in a statement.

Meanwhile, the demonstrators have been entreated to observe COVID-19 protocols and cooperate with the police for a successful event.

In November 2021, the NABCO Secretariat admitted to some challenges with persons who had for several months not received their allowances and said it had prioritized payment of those allowances to those who were owed about two months allowance.

It however gave assurances that payments to all trainees were being made and would soon reflect in beneficiaries’ accounts.

The programme ended in October 2021, though trainees were asked to remain at post.

The government had indicated, during the presentation of the 2022 budget, that the YouStart program and a digital inclusion program would gradually absorb the remaining NABCO trainees.

NABCO was introduced by the Akufo-Addo administration in 2017 as part of a job creation plan.