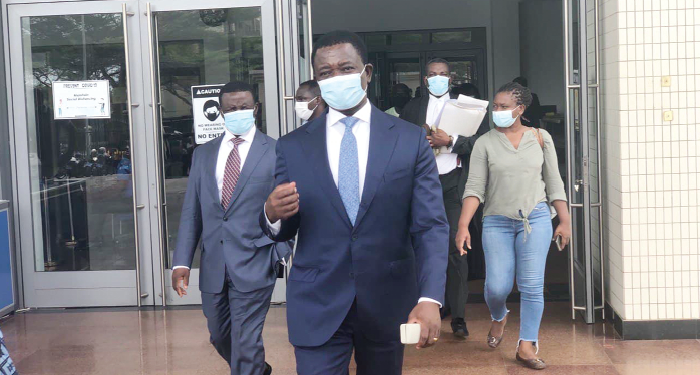 The Supreme Court has dismissed yet another attempt by former COCOBOD Chief Executive, Dr. Stephen Kwabena Opuni to get trial Judge, Clemence Honyenuga JSC off his case.

Dr. Opuni filed a two-legged application at the apex court seeking to quash some decisions of the trial Judge who is sitting as an additional High Court Judge and to prohibit him from continuing as the trial judge.

It would be recalled that an earlier attempt at axing Honyenuga JSC from the case through the Supreme Court was shot down at review, where the court said it did not see any real likelihood of bias demonstrable against Dr. Opuni.

In court on Tuesday, lawyers for Dr. Opuni, led by Samuel Cudjoe, first attempted putting Justice Honyenuga into the witness box for cross-examination.

Mr. Cudjoe told the court that on January 22, 2022, Honyenuga JSC filed his affidavit in opposition to the application, the facts of which were in serious dispute, and he (Justice Honyenuga) needed to be cross-examined on same.

Relying on case law, Mr. Cudjoe argued that a judge whose affidavit is on the record may also be cross-examined.

The Attorney-General, Godfred Yeboah Dame, however, opposed the application, arguing that there were no issues on the face of the affidavit which were not resolvable to warrant a cross-examination of the trial judge.

Describing the application as without merit and needed to be rejected, Mr. Dame insisted that the general rule was for motions to be tried on the strength of their affidavits, and a cursory glance of the trial judge’s affidavit only revealed his contention that he did not violate Dr. Opuni’s rights.

The court ruled that the records of proceedings available to it from the trial court did not reflect any personal interests of the trial judge against the applicant; as such the application to quash the proceedings of December 16, 2021, could not hold.

It further held that it did not find the existence of a real likelihood of bias against Dr. Opuni. The application was thus dismissed in its entirety.

With this, Dr. Stephen Kwabena Opuni will return to the High Court for the hearing to continue.