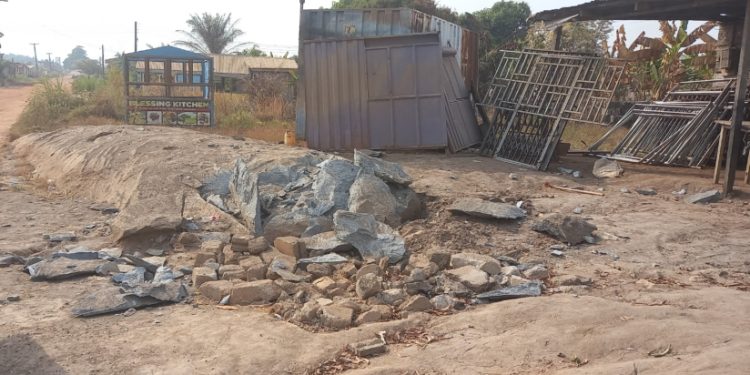 Residents of Abuakwa Manhyia in the Atwima Nwabiagya Municipality of the Ashanti Region have been left in a state of shock following an explosion allegedly caused by a Queen mother in an attempt to blast a rock in the middle of the community.

Reports from the National Disaster Management Organisation (NADMO) suggest that the suspect, in an attempt to create a path for her residents, used dynamite explosives to blast a rock hindering the creation of the path, leading to total blackout.

Speaking to Citi News, the Municipal NADMO Director Koyim Mahama Iddrisu said the action of the Queen mother has destroyed many properties.

“The explosion has had effects on electricity supply and the community as a whole. The lights went off and the buildings shook. Stones have even penetrated into some of the structures. There have however been no injuries. We are also looking for the queen mother, and the police are doing their best to get her to see where she got the authority from to do the blasting. What she did was illegal, so we have handed everything to the police to look for and caution her.”

This development comes on the back of the explosion that killed 13 persons and injured several others at Bogoso Appiate in the Western Region.

E-levy a bad idea; reduce your expenditure – Tekper to government