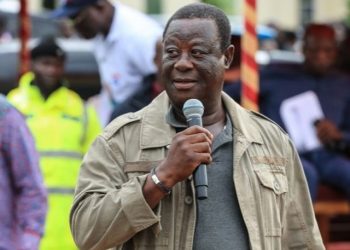 The Minister for Roads And Highways is courting the support of road contractors for the government’s controversial 1.75% Electronic transaction Levy (E-Levy).

According to the Minister, their support for the levy will help in raising more revenue, part of which will be used to pay road contractors owed by the government.

Speaking at a meeting with the leadership of the Road Contactors Association, the Minister, Kwasi Amoako-Attah also mentioned that a number of deplorable roads will be fixed when the E-Levy is implemented.

Mr. Amoako-Attah also noted that there are proposals for the various toll booths dotted across the country to be transformed into decent washrooms.

“We even want to refurbish all those toll booth structures to provide proper and decent washrooms for use by motorists to avoid situations where motorists stop to ease themselves indiscriminately.”

His comments come on the back of the National Road Safety Authority’s call on the sector Ministry to remove the booths to prevent accidents from occurring since they’re no longer serving their purpose.