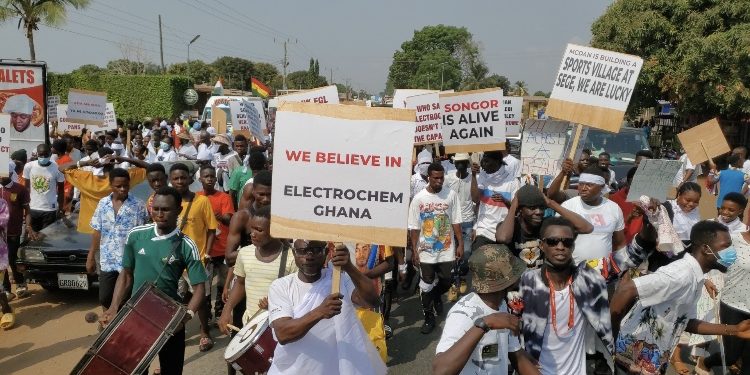 Some youth in Ada on Tuesday, February 17, embarked on a solidarity walk to display their open support for the decision by traditional authorities of Ada and the government of Ghana to lease the Songor concession to Electrochem Ghana Limited.

The mammoth walk, which was led by the Ada Youth Forum for Development (AYFfD), a community–based advocacy group started in the early hours of the day at Sege through Kasseh, and ended at the Asafotu park at Big Ada with the presentation of a note of gratitude to the Paramount Chief of Ada, Nene Abram Kabu Akuaku III. 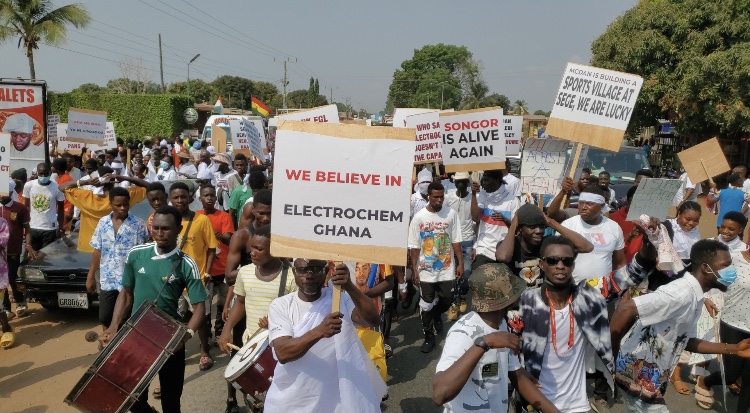 In his speech, Secretary of AYFfD, Ernest Kugblenu, expressed appreciation to the traditional council, government and other stakeholders for leasing the Songor lagoon to Electrochem Ghana for the long–awaited transformation from its artisanal status to a “world-class”salt producing site.

He said, “…..Electrochem’s achievements in just a year of operation are incontestable. The decision to create community pans for artisanal miners in communities around the concession is one initiative by Electrochem which must be lauded since it gives a lot more people access to the lagoon as captured in the Master Plan. The people of Ada, particularly fisher folks are happy that Electrochem has restored the Songor lagoon and fishing activities – which positively impacts the livelihood of the people…” 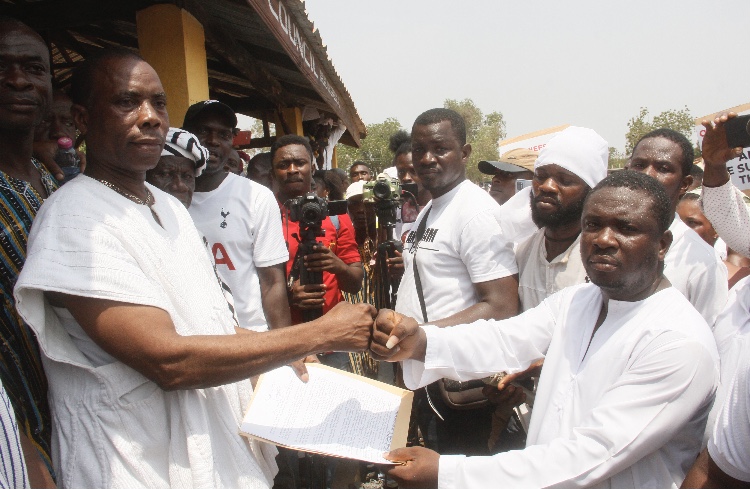 The very few people who are agitating against the redevelopment of the lagoon are yet to tell the Ada state how they want the Songor developed and what benefit the Ada state got through artisanal mining (Atsiakpor) which has been the practice for years, he noted.

Mr. Kugblenu indicated that Ada would have seen more development if similar progressive initiatives and investments were not resisted in the past in the same fashion as a few self-centered persons are presently doing.

He reaffirmed the youth’s support for the traditional authorities and for all efforts that will bring development to the Ada people and the state.

“We are very optimistic that before the 15-year lease ends, Ada will be a better place to live in”, he emphasized.

Nene Ahuodin Otumfuor, Senior Asafoatse of Kabiawetsu Clan who received the gratitude note from the youth on behalf of the Paramount Chief thanked the youth for the open support.

He urged them to disregard the rumours that the concession was sold, adding …” we were at the verge of losing the Songor lagoon because it had dried completely and for years, efforts to restore it failed. We the traditional authorities considered it prudent to partner government to lease it for only 15 years to help turn around its fortunes…”

“We have the power to renew the agreement or reclaim the concession after expiration depending on the impact the current investor makes. For now, Electrochem needs our support to get fully established and to be able to champion the development of the Ada state”, he concluded.