ASEPA’s petition to IGP baseless, we stand by our stories on Bagbin – Daily Guide 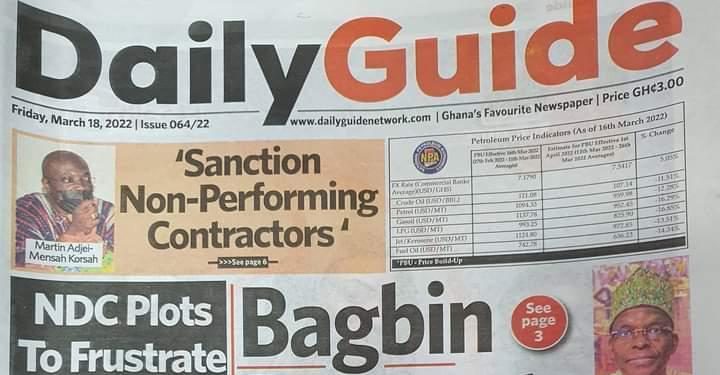 The Editor of Daily Guide newspaper, Fortune Alimi, says the newspaper stands by its series of publications about the Speaker of Parliament, Alban Bagbin, even in the face claims by the Alliance for Social Equity and Public Accountability (ASEPA) that they are falsehoods.

According to him, the publications were made based on information from trusted sources and evidence hence their insistence.

Alliance for Social Equity and Public Accountability (ASEPA), has written to the Inspector General of Police, Dr. George Akuffo Dampare, over a recent publication in the Daily Guide newspaper that alleged that the Speaker of Parliament, Alban Bagbin, had requested an additional $50,000 spending money while on his medical trip in Dubai.

According to ASEPA, the report amounts to the publication of false and malicious publications which is punishable under Ghana’s laws.

It said the police must fairly apply the country’s law to the editors of the Daily Guide newspaper just as it was applied to many other persons including its Executive Director, Mensah Thompson.

But Fortune Alimi said the petition was baseless and irrelevant as ASEPA did not have any facts on the contrary to challenge their reports.

He said the Daily Guide is ready to honour an invitation from the police concerning the publications.

“He [Mensah Thompson] is making himself a busy-body or maybe an octopus looking for a story where there is no story. We have grounds for our story so if the Inspector General of Police wants to invite us, we are ready to honour any invitation. He [Mensah Thompson] should have his facts before he goes public,” he said on Eyewitness News on Wednesday.

Among the Daily Guide’s series of publications was that the speaker requested $50,000 in addition to some $12,000 he had taken for his Dubai trip but parliament in a statement said the report is false and must be ignored.

However, Fortune Alimi said although his outfit had published parliament’s rejoinder, they stand by their story.

“We stand by it. For five trips he made to Dubai, he spent $1.1 million, and the last trip he went, when he was going, our sources say he sent $120,000 and he made additional request for $50,000. Our checks indicated that it was a transfer, not a direct amount. If ASEPA says we are lying, I don’t know where the lies are?” he quizzed.

The office of the Speaker on March 14, 2022, issued a disclaimer following a publication in the ‘Daily Guide’ newspaper dated March 11, 2022, that the Rt. Hon. Speaker, Alban Bagbin has appointed an “NDC man”, Kofi Attor as acting Speaker.